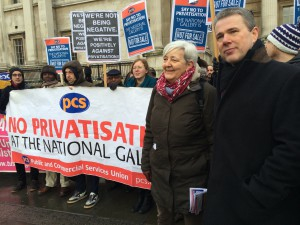 After a long running strike by the PCS union, an agreement has been reached that allows the National Gallery to go ahead with its outsourcing of services.

The bitter dispute between the Public and Commercial Services (PCS) union and the National Gallery in London effectively means a defeat for the former over the privatisation of visitor services staff that Securitas will handle in future.

The National Gallery management, led by the new Director, Gabriele Finaldi, made one concession and that was the reinstatement of union rep Candy Udwin who had been dismissed on the eve of the first walkout in February.

PCS has stated that it was pleased to have reached an agreement with the National Gallery and Securitas that would guarantee protection of terms and conditions and a return to work.

Though the ending of the dispute is being dressed up as an agreement between the sides, there is little doubt that management will have viewed the resolution with greater satisfaction.

In a short but carefully worded statement, it said: ‘The National Gallery is delighted to confirm that from Monday 5 October 2015, the Gallery is now fully open to the public.

The suspension of the current strike action is following positive discussions with the PCS union, and pending further talks.’ Securitas was even more circumspect and when approached by TwinFM for a statement said it had nothing further to say and referred to its press release of 31 July 2015 on the news it had won the contract with the National Gallery.

This has left the PCS with trying to make the best of the situation. “We are pleased to have reached this agreement and on behalf of the union I would like to pay particular tribute to Candy, who is looking forward to returning to the job she loves and to all our members at the gallery,” commented Mark Serwotka, General Secretary, PCS. “We still do not believe privatisation was necessary but we will work with the new company and the gallery to ensure a smooth transition and, importantly, to ensure standards are maintained at this world-renowned institution.”