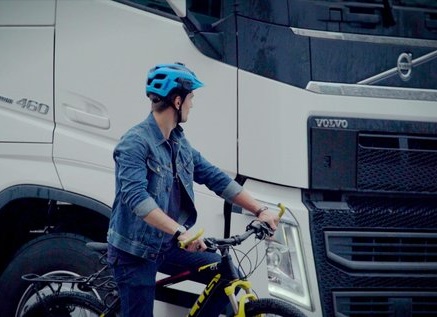 Transport for London has published research that shows having direct vision from the cab of a lorry rather than relying on mirrors and monitors has a substantial impact on improving road safety for pedestrians and cyclists.

The findings have been published and Transport for London (TfL) is in the midst of the first consultation into the use of its 'zero to five star' Direct Vision Standard for HGVs operating in the Capital. The consultation closes on April 18. it aims to identify how the new Standard can be best used to reduce road casualties on London's roads.

London Mayoral plans to eliminate the most dangerous HGVs from London's streets entirely by January 2020. These HGVs, often 'off-road' lorries, would be 'zero-star rated' by the Direct Vision Standard - determined by the level of vision the driver has directly from the cab. By setting out the plans now, TfL expect many dangerous lorries will be upgraded before the restriction comes into place.

Recent data shows that HGVs were involved in 22.5 per cent of pedestrian fatalities and 58 per cent of cyclist fatalities on London's roads in 2014 and 2015, despite only making four per cent of the miles driven in the Capital.

As part of the new research, a simulator was used to replicate a real-life driving situation for the first time. It showed that the amount of direct vision a driver has could be a crucial factor in allowing a dangerous collision to be avoided. The study showed that drivers respond, on average 0.7 second slower when checking blind spots and monitors compared to directly through the windows. This delay can result in a lorry travelling an extra 1.5 metres before seeing a nearby road user, enough to cause death or serious injury.

Sadiq Khan, Mayor of London, said: "This new research shows how important it is we take bold action to address dangerous and poorly designed lorries operating in the Capital. HGVs with poor vision of cyclists, pedestrians and other road users from their cabin should simply not be allowed on London's roads. Every time someone is killed by a lorry on London's roads it is an appalling tragedy. Our Direct Vision Standard will be the first of its kind in the world, and TfL will lead by example by not using any zero-star lorries in its future supply chain."

Cllr Julian Bell, chair of London Councils' Transport and Environment Committee, said: "It is taking far too long for lorry manufacturers to realise that their outdated juggernaut style vehicles are not suitable for our city street environments. More needs to be done to improve lorry safety standards at a national and international level but in the meantime, I welcome this intervention.

"We need to encourage as many people as possible to cycle and walk when they can, to better improve our chances of tackling key priorities such as congestion, air quality and improving the health of Londoners."

Picture: Meanwhile, Volvo Trucks is taking an initiative to improve safety awareness among unprotected road-users with a new global training package called ‘See and Be Seen’ directed at cyclists from 12 years old and up - Click Here to find the materials

Amid an increase in road deaths and declining eye tests in the UK, a new initiative is highlighting the importance of sight to motorists to help them safeguard their...