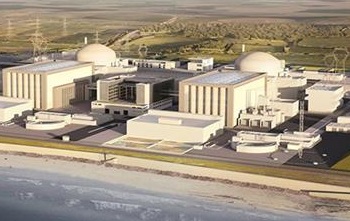 A Public Accounts Committee report has slated the Government for its Hinkley Point power deal with EDF and their Chinese backers and insisted the first UK nuclear plant since to be built since 1995 must deliver on promises of wider benefits to UK businesses, workers and apprentices.

The Committee is more than concerned consumers are locked into an expensive deal lasting 35 years and that the Government did not revisit the terms between the original decision to go ahead and now, despite estimated costs to the consumer having risen five-fold during that time.

A Committee spokesperson said: "Over the life of the contract, consumers are left footing the bill and the poorest consumers will be hit hardest. Yet in all the negotiations no part of Government was really championing the consumer interest."

Hinkley Point C will cost £18 billion with state owned Électricité de France coughing-up two thirds of the cost and China the rest. However, the plan has hit several snags already, including a major supplier, Toshiba, unable to fulfil its commitments; and similar projects in France dragging years and years beyond their original completion dates. Many expect the £18 billion to figure to mushroom.

At one point, PM Theresa May attempted to back away from the deal but was put in place by the Chinese Government which would not tolerate such a thing given their pledge to let the City manage £6 billion of their funds.

The deal still stands that guarantees EDF a fixed price of £92.50 per megawatt hour for the electricity it produces for 35 years even if the electricity is not used; or should the general retail price of electricity fall below that rate, consumers will be obliged to pay the higher difference.

The Committee are appalled that consumers will face ridiculously prices way above market controlled rates.

The Committee have, however, not referenced the generally accepted notion that by the time Hinkley C comes on stream - improved renewables tied in with improved storage will mean Hinkley electricity will not be required; and the capacity for the grid to accept its base load will not have come to fruition...roughly speaking, even if there were no renewable equation, the UK won't be able to efficiently take Hinkley electricity anyway.

The Department for Business, Energy and Industrial Strategy already accepts that 'top-up payments' will cost the country £30 billion. That figure could easily mushroom.

As the financial case for Hinkley has weakened, the Government has talked up the boost to jobs and skills that Hinkley will generate, says the Public Accounts Committee report. 'But the Government has no clear plan of how these so-called wider benefits will be achieved or crucially how it will measure success'.

The Committee spokesperson said: " We have seen other large infrastructure projects promise a lot of jobs and skills and not deliver. The Government must act now to firm up its vague promises of wider benefits so UK workers, supply chain businesses and apprentices can see tangible benefits. With Brexit looming delivering a plan for the wider benefits has even more urgency as we cannot be sure that we will attract the necessary skills from overseas."

Public Accounts Chair, Meg Hillier MP said: "Bill payers have been dealt a bad hand by the Government in its approach to this project. Its blinkered determination to agree the Hinkley deal, regardless of changing circumstances, means that for years to come energy consumers will face costs running to many times the original estimate. The Government made some grave strategic errors here and must now explain what it will do to ensure these are not repeated.

"But more than that, it must deliver the supposed wider benefits of this project - benefits Government has talked up progressively as the case for Hinkley Point C has weakened but which it has no plan to secure.

and appears to have no coherent idea of what to do about it."

Picture: Hinkley C as it might look when it gets built