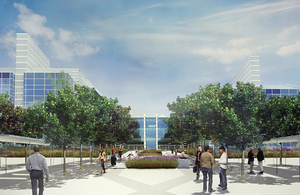 Public Health England (PHE) held a second 3-day exhibition earlier this month to update on plans to create its headquarters and a Public Health Science Hub and Laboratory at Harlow in Essex.

The £400 million project will involve redeveloping the vacant GlaxoSmithKline site at the New Frontiers Science Park to create a centre of excellence for research, health improvement and protection. The state-of-the-art science research facilities will bring together world renowned scientists to work on a single campus.

Following PHE’s first exhibition in May, this second event provided an opportunity for the local community to see how the plans have developed including information about jobs, apprenticeships and benefits to Harlow. More than 200 people attended including schools, local business representatives, the local MP and councillors, community and voluntary sector groups as well as local residents.

The latest plans include identifying potential expansion areas on the site, ideas for travel and sustainability, new office space and laboratories, and an arrivals space. This last building is likely to include publicly accessible exhibition space, a training laboratory for educational purposes and a media centre.

The public exhibition was held at Science Alive at Harlow Leisurezone from Thursday 6 October to Saturday 8 October 2016.

PHE Programme Director Tim Harry said: “This second exhibition provided an excellent opportunity for PHE to update the local community on the plans for the science hub and in particular describe how they have progressed since our first exhibition in May, taking on board the comments and feedback that we received from the public.

“It is vital that we engage with and really understand how local people feel about our proposals and I was delighted that so many took the time to come and talk to us.”

For those local residents who could not attend the exhibition, updated information including the exhibition display boards and images are available on the PHE website.