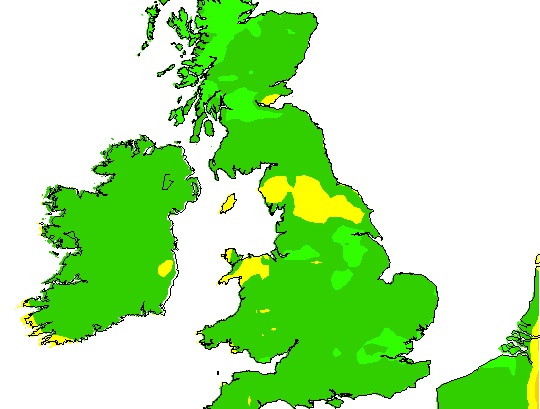 This week's headline news has been the weather - or more precisely the weather conditions that have been blowing Saharan dust clouds in to mix with are own UK produced smog.

A warm weekend is predicted across the hole of the UK and Northern Ireland but that does not guarantee no rain. In fact, those of us that are likely to be watching the big horse race from Aintree are likley to see the 40 runners set off over the fences in rain.
See our Grand National Sweepstake kit here

DEFRA has updated its guidance on air conditions and no health warnings are in place. DEFRA's forecast is as follows:

Moderate levels of air pollution are forecast for parts of northern England, Wales, southwest Scotland and eastern Northern Ireland, otherwise levels are expected to be Low as southwesterly winds continue.

Low levels of air pollution are expected across almost all parts through Sunday, Monday and Tuesday as cleaner air will continue to spread in from the Atlantic. It is possible air pollution levels may rise to Moderate in isolated areas.

Story as Reported by ThisWeekinFM 2 April

The morning news and weather forecasts have made much of an impending pollution/air quality crisis.

Although deteriorating air quality predicted for the next three days should not be sneezed at, DEFRA has in fact issued a health warning for those with respiratory complaints and not for the whole population. However, ThisWeekinFM’s warning to facilities managers is to work with personnel departments to advise employees and to ensure nominated first aiders are up to speed.

Public Health England scientists issue advice for parts of England and Wales are warning of high pollution levels for the country – urban areas will be particularly hard hit as the combination of atmospheric conditions and car exhaust fumes create  ‘perfect storm’ conditions.

In the last few days a combination of local emissions, light winds, pollution from the continent and dust blown over from the Sahara has caused a spike in the UK Air Quality Index compiled by the Department for Environment, Food and Rural Affairs (Defra). And those higher than usual levels of pollution may have bring on health effects in some.

Dr Sotiris Vardoulakis, head of the air pollution and climate change group at PHE’s Centre for Radiation, Chemical and Environmental Hazards said: PHE provides advice to Defra on the health effects of air pollution. While most people will not be affected by short-term peaks in air pollution, some individuals, particularly vulnerable groups such as those with existing heart or lung conditions, may experience increased symptoms.

”On occasions where levels are high, adults and children with lung problems and adults with heart problems, should reduce strenuous physical exertion, particularly outdoors and particularly if they experience symptoms. People with asthma may find they need to use their reliever inhaler more often. Older people should also reduce physical exertion. Anyone experiencing discomfort such as sore eyes, cough or sore throat should consider reducing activity, particularly outdoors.”

For an explanation of what the pollution levels measured by Defra mean, and for what steps to take, visit uk-air.defra.gov.uk/

For England and Wales, Moderate to High air pollution levels are forecast for central and southeast England, to the south and east of a line from around The Wash to Cheshire to east Devon, with local Very High levels expected in parts of East Anglia and the East Midlands. This is due to light easterly winds continuing to bring in pollutants and allow local pollutants to remain close to source. There may also be some component due to Saharan dust. Across the south and east of Wales and along the north coast of Wales, around Wirral and Merseyside, as well as the rest of Devon, mainly Moderate pollution levels are forecast. For the rest of northern England, Cornwall, and the northwest of Wales, levels are expected to be Low either due to showers or a fresher breeze. Local moderate levels are forecast over the north of Scotland, and also some parts of the south of Scotland, especially urban areas. Otherwise, for Northern Ireland and for the remainder of Scotland, levels are forecast to be Low.

High levels of air pollution are forecast for East Anglia, the Midlands, including Lincolnshire, easternmost parts of Wales, through Wirral and the north coast of Wales, then north over much of coastal northwest England, to southwest Scotland and the northeast of Northern Ireland. Moderate pollution is forecast many other parts of England and Wales, except most of north-eastern England, south-western Wales, the south of England south of the London to Bristol line, except southwest counties and Kent where levels are expected to be Low. For southwest Wales and southernmost counties of England, the improvement is due to winds veering to a south to southwest direction after rain, bringing cleaner air from the Atlantic, although southwest England is expected to have local Moderate levels due to increase in ozone.

On Friday, most of the UK is expected to Low levels of pollution in cleaner south-westerly winds, although local Moderate levels are forecast for some areas, especially southwest England, Kent, North Yorkshire and parts of southern Scotland due to ozone. Mostly Low levels are forecast across the UK through the weekend.

Forecast from DEFRA. Map from the Met Office 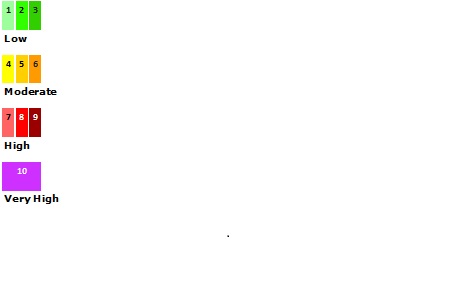