Airplane 3 - Focus on Remaining Airport Plans as Boris Bites Back 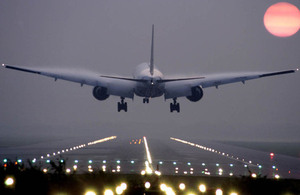 The Airports Commission has announced its decision not to add the inner Thames estuary airport proposal to its shortlist of options for providing new airport capacity by 2030. But Mayor Boris Johnson has slammed the decision and vowed to fight on for his plan - see below.

Following detailed further study into the feasibility of an inner Thames estuary airport the commission has concluded that the proposal has substantial disadvantages that collectively outweigh its potential benefits.

Airports Commission Chair Sir Howard Davies said: "We are not persuaded that a very large airport in the Thames estuary is the right answer to London’s and the UK’s connectivity needs.

"While we recognise the need for a hub airport, we believe this should be a part of an effective system of competing airports to meet the needs of a widely spread and diverse market like London’s.

"There are serious doubts about the delivery and operation of a very large hub airport in the estuary. The economic disruption would be huge and there are environmental hurdles which it may prove impossible or very time consuming to surmount. Even the least ambitious version of the scheme would cost £70 to £90 billion with much greater public expenditure involved than in other options – probably some £30 to £60 billion in total."

Need for additional capacity is urgent

Sir Howard continued: "There will be those who argue that the commission lacks ambition and imagination. We are ambitious for the right solution. The need for additional capacity is urgent. We need to focus on solutions which are deliverable, affordable, and set the right balance for the future of aviation in the UK."

The commission will now continue its appraisal of the 3 shortlisted proposals for additional capacity and will publish the appraisal for public consultation in the autumn.

The Mayor of London, Boris Johnson, has told the Airports Commission that their failure to take forward the only credible option for aviation expansion means their work will become increasingly irrelevant, as he cannot conceive of any possible scenario in which a Government would approve the expansion of Heathrow.

Responding to news that the Airports Commission intends to consult on plans for new runways at Heathrow and Gatwick but will not proceed with consultation on a four-runway hub airport in the Thames Estuary, the Mayor expressed deep regret that the Commission has taken the debate back to two options that have been on the table for half a century without ever reaching take-off.

The Mayor expressed disbelief that while the Commission 'seemed to have no single reason to rule out an estuary airport, they appeared unable to recommend it simply because of its sheer scale and vision'. Sir Howard Davies has told the Mayor that the debate on a second additional runway would need to begin by 2020, well before construction of either a third runway at Heathrow or a second runway at Gatwick could start.

Boris Johnson said: "It is clear that the political Kryptonite of a third runway at Heathrow will run into immovable political opposition, as it has in the past because of the appalling environmental consequences it will deliver to a million or more Londoners. And building a fourth runway at Heathrow would be an environmental disaster for London. Equally expanding Gatwick Airport will fail to provide the global connectivity that can only come from a large, four-runway hub airport. I remain convinced that a future Government will return to plans for a hub airport on a site to the east of London and any future recommendation made by the Davies Commission will be irrelevant.

"In rejecting the possibility of a new airport, the Commission has also turned its back on the rapidly growing population of London. That population desperately needs the homes and jobs that his Estuary proposal offers. The regeneration of east London and the Thames Gateway, entirely in line with current Government policy, would transform the south-east and create 336,000 jobs across the UK, whilst contributing £92 billion annually to UK GDP by 2050, dwarfing both Heathrow and Gatwick. A regenerated site at Heathrow could provide homes for up to 190,000 residents and as many as 90,000 jobs. Without a four runway hub airport it is clear that cities around the UK whose airports have already lost their connection with Heathrow, will fail to get it back as a third runway will be full from day one. Even the Airports Commission's calculations show that."

The Mayor has confirmed his team will continue to make the case for a new airport to the east of London and ensure that the ongoing debate is considered.