All Set Fair in Northumberland 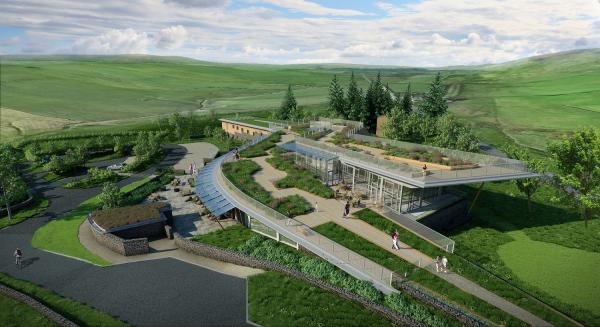 The Sill National Landscape Discovery Centre has received the official green light to move into the construction phase.

Northumberland National Park Authority members have approved the decision to approve the £14.8 million development, after agreeing cost proposals put forward by the contractor appointed for the scheme.

In keeping with the heritage and environment of Northumberland National Park’s landscapes, the new building will harmoniously reflect the distinctiveness of the Northumbrian landscape in both its shape and the materials used in its construction. Its focal point will be a Whin Sill grass roof, planted to replicate the natural grasslands of the surrounding area. The Sill’s fully accessible living roof will sweep gently upwards, giving visitors a bird’s eye vantage point across one of the UK’s most memorable landscapes and the UNESCO World Heritage Site of Hadrian’s Wall.

From its biomass boiler to its photovoltaic atrium, it is reported that The Sill will meet the highest standards of sustainability. The building will have inherent conservation messages throughout and will raise awareness of the impact of climate change both through interactive displays and its commitment to be a green facility; 80% of its energy needs will be met by on-site renewable energy generation.

The construction phase alone is set to bring in more than 100 new jobs to the region each year. When The Sill is fully operational from summer 2017, it is predicted it will deliver substantial economic benefits to the region with around £5 million of additional visitor spending every year. The Sill’s Rural Growth Hub will support the development of rural enterprises, and the project will also offer a wide range of volunteering opportunities.

“What we have witnessed today is one of the most remarkable and exciting decisions ever taken by our National Park Authority Members,” stated Cllr Glen Sanderson, Chairman, Northumberland National Park. “It’s a sign of their true vision for the future and means we can push on into construction of The Sill – the UK’s first dedicated National Landscape Discovery Centre.”

Picture: An aerial view of what The Sill in Northumberland will look like when it is due to open in the summer of 2017