All's Rosy in the Garden Bridge - For Now 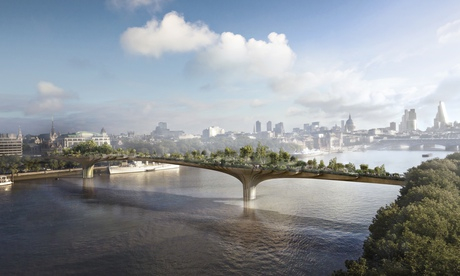 The row over the funding and location of London’s Garden Bridge may at least have had the financial side of the project resolved this week.

The agreement limits TfL’s contribution to the construction of the bridge to £10 million, rather than the original £30 million contribution. This decision means that the negotiations for the bridge’s south landing site in Lambeth will resume.

The Lambeth council leader, Cllr Lib Peck, had previously suspended the negotiations because of “growing concerns” of the £30 million TfL had contributed to the scheme. “I’m pleased that Londoners are getting a better financial deal, particularly at a time of austerity when all public sector organisations are being forced to make deep cuts to services,” commented Peck. “We’ve been in tough negotiations with the GBT and TfL and I’m pleased we’ve successfully agreed a deal that will cut London taxpayers’ contribution towards the Garden Bridge by two thirds.”

The GBT also declared its satisfaction at agreement being reached. “We have been hugely successful in our efforts to raise funds from the private sector with £85 million pledged to date and we have agreed that any of the committed funds from TfL spent over the £10 million will be treated as a loan,” explained Lord Mervyn Davies, Chairman, GBT.

Picture: The financial shenanigans over London’s Garden Bridge appeared to have been resolved this week