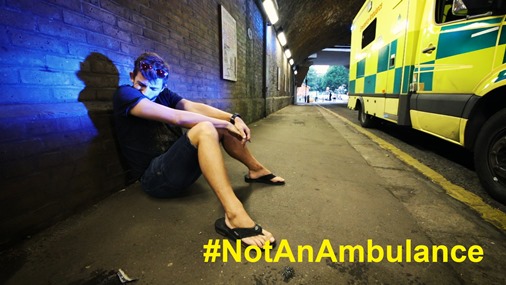 The London Ambulance Service has revealed which London boroughs see the highest number of alcohol-related incidents as part of its #NotAnAmbulance campaign which encourages people to look after their friends if they have drunk too much.

And it would seem that Londoners are getting more drunk in August than in December’s party season.

Summertime binge drinking has become such a problem, the London Ambulance Service has for the first time run an alcohol campaign in August and shared a new, 90 second film on its social media channels which highlights the issue.

The boroughs which recorded the highest number of alcohol-related incidents in London are:

City of London and Hackney

London Ambulence Assistant Director of Operations, Peter Rhodes said: “These figures just underline the significant impact alcohol-related incidents have not just on these boroughs, but across the whole of the capital.

“It is no longer a weekend phenomenon as our crews have to respond to alcohol-related calls every day of the week, taking resources away from those who need us most.

“There is then an impact on operations in each of these boroughs as ambulances are taken off the road to be cleaned and disinfected. While we are treating patients who have had too much to drink others, who are potentially seriously ill or injured, could be waiting for our help.

“A lot of the alcohol-related incidents we respond to don’t need an ambulance – they need a friend to take responsibility to get them home safely and look after them.”

In London, over 6,650 people were treated by ambulance crews after drinking too much in August 2016 – compared to less than 6,000 in December 2016. 25% of all alcohol-related incidents a week occur between midnight – 6am on a Saturday and Sunday

400 alcohol-related incidents in August 2016, and over 4,830 recorded incidents throughout the year.

City of London and Hackney

Top tips for a safe night out

Eat before drinking: Make sure you eat before you go out or start your night somewhere that serves meals or snacks. It’ll provide more energy and lessen your hangover the next day.

Try pacing and spacing: Having a soft drink or some water between alcohol drinks slows the rate of your drinking.

Drink smaller drinks: A large glass of wine in most bars is equivalent to a third of a bottle!

Keep a check on how much you’re drinking: The ‘One You Drinks Tracker’ will help you keep track of how much you are drinking and spending

Look after each other: Look after your friends and colleagues and make sure you know how you are getting home at the end of the night

Plan your journey home: Don’t leave it to chance—think about how you’re going to get home, and who with, before you go out. Make arrangements before you start drinking, and make sure you don’t get left to walk home alone.

London Ambulance Service NHS Trust is the busiest emergency ambulance service in the UK with over 4,500 staff, who work across a wide range of roles based in 70 ambulance stations, serving more than eight million people who live and work in the London area.