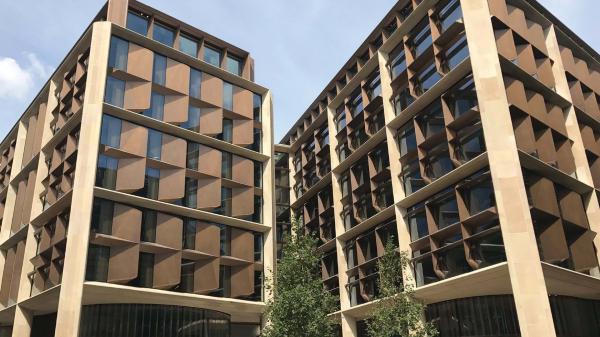 Bloomberg’s new European headquarters building, which just opened in London, has been rated as the World’s Most Sustainable Office Building.

The building achieved an ‘Outstanding’ rating against the BREEAM sustainability assessment method, with a 98.5% score. This is the highest design-stage score ever achieved by any major office development.

Michael R. Bloomberg, founder of Bloomberg L.P. said: "We believe that environmentally-friendly practices are as good for business as they are for the planet. From day one, we set out to push the boundaries of sustainable office design - and to create a place that excites and inspires our employees. The two missions went hand-in-hand, and I hope we've set a new standard for what an office environment can be."

Compared to a typical office building, the new Bloomberg building's environmental strategies deliver a 73% saving in water consumption and a 35% saving in energy consumption and associated CO? emissions. Innovative power, lighting, water and ventilation systems account for the majority of energy savings.  Designed to utilise waste products, respond to the building’s external environment and adapt to its occupancy patterns, many of these solutions are first-of-a-kind.

Norman Foster, Founder and Executive Chairman, Foster + Partners, said: “In some of our first discussions on the project, Mike Bloomberg and I arrived at a ‘meeting of minds’ on how the design of the new Bloomberg headquarters should incorporate the highest standards of sustainability. The project evolved from thereon into a building that is one of the most sustainable in the world. The deep plan interior spaces are naturally ventilated through a ‘breathing’ façade while a top lit atrium edged with a spiralling ramp at the heart of the building ensures a connected, healthy and creative environment.”

Alan Yates, Technical Director of BRE Global's Sustainability Group said: "What sets the Bloomberg building apart is its relentless focus on innovation and its holistic, integrated approach to sustainable construction and design. Projects like these are really important in giving confidence to the industry to experiment."

Smart Airflow: Smart CO2 sensing controls allow air to be distributed according to the approximate number of people occupying each zone of the building at any given time. The ability to dynamically adjust airflow in response to occupancy hours and patterns is expected to save 600-750 MWhr of power per annum, reducing CO2 emissions by approximately 300 metric tonnes each year.

Combined Heat & Power: An on-site Combined Heat and Power (CHP) generation centre supplies heat and power in a single, efficient system with reduced carbon emissions. Waste heat generated from this process is recycled for cooling and heating and, in use, is expected to save 500-750 metric tonnes of CO2 each year.

Picture: Bloomberg’s new European headquarters building in London has been rated as the World’s Most Sustainable Office Building