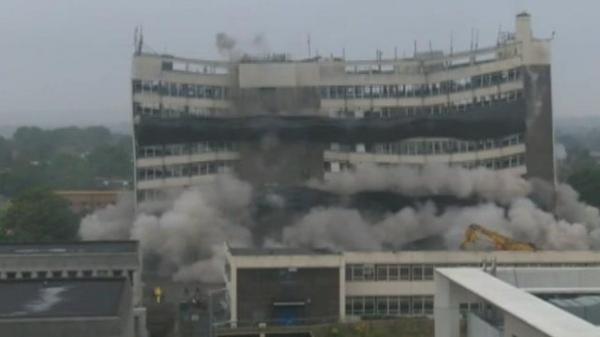 The 12-storey Council House which shaped Doncaster's skyline for five decades was demolished on Sunday 20 Jul) as the regeneration of the town centre continues.

The former home of the National Coal Board and more latterly Doncaster Council was brought down at 8.16am by controlled and safe implosion.

Clearing the site will enable new projects to proceed in the Civic and Cultural Quarter (CCQ) led by the council and its development partner Muse Developments. Bringing the building down also saves the council having to pay business rates and other costs associated with empty buildings.

Peter Dale, Director of Regeneration and Environment, said: "The building dominated our skyline for nearly 50 years but its time had come to an end as we look to the future. Doncaster is regenerating itself. We are creating a great place to live, work, invest in and visit."

Dan Needham, regional director for Muse Developments, added: "This demolition is extremely important for the town, as it will create opportunities for future development and allow us to keep up momentum. The first phase of the CCQ has been a great success, we're now looking forward to the next phase and improving the leisure offer in the town."

The 40metre tall Coal House became the National Coal Board's headquarters in December 1966. On 8 May 1992, Doncaster Council moved in and it was renamed the Council House. It remained the council's headquarters until January 2013 when the new Civic Offices opened as part of the CCQ masterplan which is transforming the Waterdale area.

Bringing down the Council House

Following five months of preparation, DSR Demolition Limited used approximately 36kg of explosives to blow down the building. Some 756 small charges were placed on the four main blast floors: the ground, first, fifth and ninth floors and by using 700 delay detonators over 1.2 seconds the building caved in. Each charged column and wall was individually wrapped with protective materials and extra protection materials were wrapped around the outside of the blast floors to ensure it came down safely.

Emma Thompson BA, QHSE Manager, DSR Demolition contractors said: "It has been a challenging project but the end result will be well worth the effort."

The site will be landscaped before being redeveloped as part of the Civic and Cultural Quarter. Detailed master planning is underway which will determine the type of development suitable for the site. Further details on how the next stage of this major regeneration project will look should be available later in the year.

The CCQ includes Cast - the impressive new performance venue which opened in September 2013; Sir Nigel Gresley Square named after the famous rail engineer who oversaw the creation of locomotives like Mallard in the town; new civic offices; an upgraded road network which helps reconnect Waterdale with the town centre; a refurbished 850 space Civic Quarter Car Park; and over 50 new homes which are going up at 'The Gables' housing development.

Pictured: Doncaser The Council House Demolition with thanks to the BBC - Click this link to see the demolition on the BBC news website