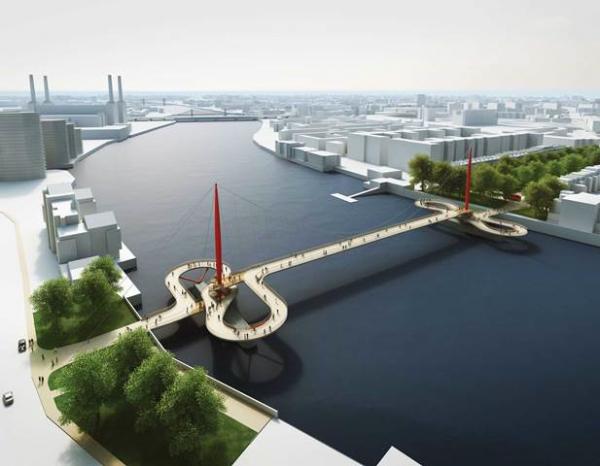 Wandsworth Council in London has published its shortlist for the Nine Elms to Pimlico bridge competition.

The local authority revealed the four design teams to have made it through to the second stage of the Nine Elms to Pimlico bridge competition.

In a high profile contest, 74 entries were submitted with each team submitting a rival proposal for a new pedestrian and cycle link across the Thames.

The successful teams are, in alphabetical order:

In coming to its decision, the panel considered feedback from more than 1,000 people who responded to the stage one public exhibitions as well as detailed technical assessments for each proposal.

A Transport for London (TfL) transport study had stated the Nine Elms to Pimlico Bridge had a ‘strong business case’ and would provide a valuable route through central London to support the shift towards zero emission, sustainable travel options. A £26million contribution has already been identified from the development of Nine Elms and the new design would be used to lever-in further funding. The scheme has the support of the Mayor of London.

The bridge is part of the infrastructure package needed to support growth in Nine Elms and Vauxhall where tens of thousand of new jobs and homes are now being created alongside what the council argues are billions in growth and tax receipts.

During the next stage of the competition, the shortlisted teams will develop their initial ideas into detailed designs. Wandsworth Council expects to announce the winning team in late autumn this year. A new bridge would require planning permission before it could be built.

“The quality of the submissions went beyond our best expectations and the interest this competition has generated across London has been tremendous,” stated Cllr Ravi Govindia, Wandsworth Council Leader.

Picture: One of the shortlisted designs for the Nine Elms to Pimlico Bridge – the initial design idea from Ove Arup & Partners with Hopkins Architects and Grant Associates.