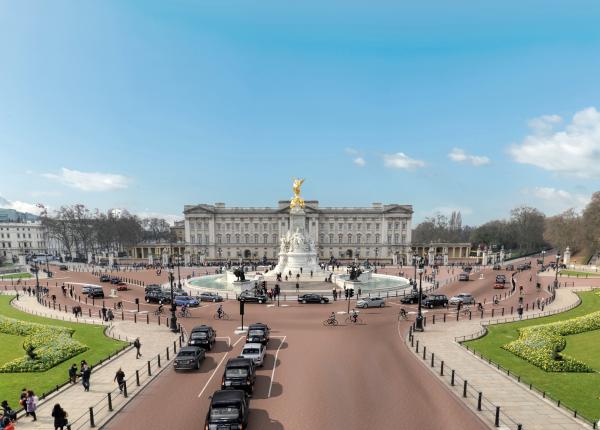 The Mayor of London, TfL and the Royal Parks have reached an agreement on the final section of the East-West Cycle Superhighway, with a segregated track by Buckingham Palace.

The plans provide a trial two-way segregated cycle track on Spur Road, in front of the Queen Victoria Memorial at Buckingham Palace, closing the last gap in the route and providing continuous fully-segregated and protected cycling across central London from Tower Hill, through Parliament Square to Hyde Park Corner and Lancaster Gate. They provide a safer route for cyclists through one of central London’s most intimidating gyratories, which is also one of the Mayor’s 33 'Better Junctions”' where major improvements for cyclists have been pledged.

The Mayor, Boris Johnson, said: “This is the final jigsaw piece in what will be one of the world’s great cycling routes. The new East West superhighway will be a treasured part of our new network, running through the heart of the capital and past the front door of some of our most loved landmarks such as the Houses of Parliament and Buckingham Palace.”

Public consultation on the Spur Road proposals will run until 4 October. Specially-designed bollards in keeping with the road’s heritage and character would be used to segregate cyclists. Like the current traffic lights and islands, they would be removable for ceremonial occasions. Blue paint would not be used on the road surface by Buckingham Palace or throughout the park. Subject to the outcome of the public consultation, the changes would be implemented at the same time as the rest of the superhighway opens, in summer 2016. They would be trialled for a year to assess their effectiveness.

The proposals also include major benefits for pedestrians and visitors to the Changing of the Guard ceremony, with better pedestrian crossings and almost 900 square metres of new footway to accommodate growing crowds. Cycle-pedestrian conflicts will be reduced by the separation of the existing cyclist and pedestrian tracks on Constitution Hill. The cycle track will also improve the experience for visitors enjoying St James’s Park and Green Park, creating a new buffer between the parks and the noise and fumes of vehicles. The proposals involve the removal of traffic lanes on Spur Road but would have little or no impact on traffic on this short stretch.

Leon Daniels, Managing Director of Surface Transport at TfL, said: "Work on transforming London into a cycling city is now well and truly underway with engineers working day and night across the Capital to deliver these improvements. Once completed, the new East West Cycle Superhighway will become one of the world’s most iconic cycling routes with this proposed section in front of Buckingham Palace no doubt becoming a postcard icon of the future. We look forward to hearing people's thoughts on these proposals and, if approved, will work to deliver them as quickly as possible.”

Picture: The Cycle Superhighway will pass under the Queen's balcony.