Building Projections for the Red Box at 80 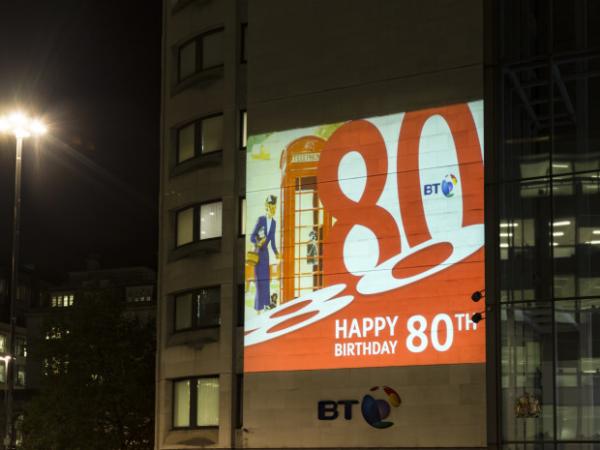 Giant images of BT’s much loved classic red K6 telephone box were projected onto several of the company’s central London buildings, including its headquarters building near St Pauls, to celebrate the design icon’s 80th birthday.

David Hay, head of BT Heritage, said: “The red telephone box and in particular the classic K6 is an important part of the UK’s history and regularly tops the polls as a design and cultural icon. They’re recognised by people around the world. The K6 is held in great esteem and is an ambassador for the UK around the globe - many are now found in countries as diverse as the US, Cuba, Brazil, Switzerland, Hungary and Germany.”

Out of a total number of 46,000 working public payphone kiosks on the streets of the UK, around 8,000 are traditional red phone boxes, of which the majority are K6s. The architectural significance of the traditional phone box has seen2,400 kiosks designated as grade II listed buildings.

BT is also providing for sale a limited number of refurbished examples of traditional phone boxes so that people can buy their own piece of history. To commemorate the K6’s 80th birthday a small number of kiosks are being specially painted in a Union Jack design instead of the standard bright red.

Since 2008, BT has been encouraging communities where their local phone box is not being used by people making phone calls, to preserve it by buying it, with the payphone removed, from the company for just a £1 under the Adopt a Kiosk scheme. This has enabled towns and villages across the land to preserve their own part of Britain’s heritage. Adopt a Kiosk has captured the imagination of people up and down the country and more than 3,500 kiosks have been adopted and transformed into a huge variety of new uses.

Many decommissioned phone boxes have been fitted with life-saving defibrillation machines, others have been turned into art galleries ,mini libraries, exhibitions and information centres. One village turned theirs into a one-night-only pub, when their local closed down.Fans of the BBC Radio 4’s long-running drama The Archers will know that even the villagers of Ambridge adopted their phone box for use as a mini-information kiosk.

Picture: Projections onto BT's London buildings in celebration of the K6 at 80