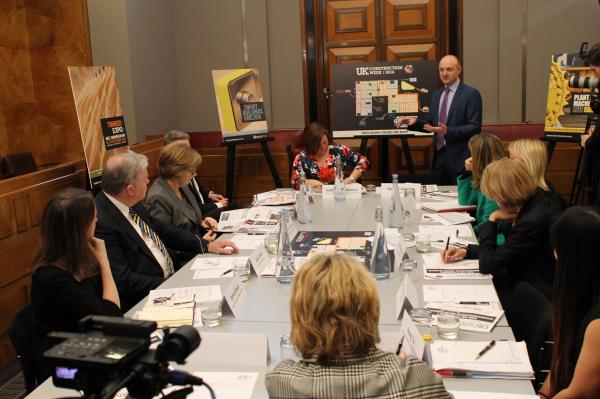 The industry still lacks the understanding and leadership required to address inequality according to a recent discussion attended by leading figures of diversity in construction.

Brought together to form the UK Construction Week Diversity Advisory Group, the 10-person panel confronted the major barriers and challenges the industry faces in bridging the diversity gap when it met at the RIBA offices recently.

With a firm commitment to encouraging the social shift that was seen as much needed in the industry, the’ lessons’ learned from the panel discussion are hoped to shape the agenda for the event in October, ensuring that construction professionals at all levels are equipped to embrace diversity and other challenges, turning them instead into what the panel saw as positive opportunities.

Two interesting schools of thought emerged around tackling the issue at grassroots versus leadership from the top. Much of the discussion centred around reputation and the difficulties faced in attracting any youngsters into the construction industry and particularly females and ethnic minorities.

Sarah Davis, CEO, Skills4Stem Ltd stated that there needed to be an early start – at the age of five or six, when children are first gaining an opinion on what they want to be when they grow up. “Parents are also hugely influential at this stage and the problem we face is that few will encourage their children to aspire to a career in construction,” argued Davis. “We need to also educate the parents.”

The teachers too, it seems were not excluded from the process and the panel Chair, Bridget Bartlett, DCEO of the CIOB, cited poor careers’ guidance as another limiting factor and felt more needed to be done by the industry to educate and ‘excite’ youngsters about a career in construction. Although there were some excellent examples of the construction industry becoming involved with children with a host of wide ranging ideas, it was agreed these were generally ‘pockets of activity’.

In fact, fragmentation was regarded as possibly one of the biggest problems.

It was clear from those around the table itself that there were a huge number of associations, working groups and campaigns all working towards the same goals. Girls’ schools were almost inundated with well-meaning gender diversity initiatives, for example, and many did not know which way to turn.

Caroline Buckingham, Director HLM & RIBA Vice President Practice & Profession, even questioned whether ‘women’ orientated groups were fundamentally detrimental? “Events that focus on women talking to women, I’m just not sure they do us any good,” she confessed. “I don’t wan’t to be a role model for just women, I want to be a role model for everybody.”

“It’s about time we stopped reinventing the wheel,” challenged Denise Bower, Executive Director, Major Projects Association. “There are 49 different professional bodies in the construction industry and this proliferation of initiatives, all aiming to achieve the same thing, in a slightly different way, means that they are ineffective overall.”

However, Dr Nelson Ogunshakin, CEO of ACE, felt that effort at grassroots level was actually futile and what the industry really needed was stronger leadership and commitment from the top.

“We talk the talk but we don’t walk the walk,” he declared. “We need to see a proper commitment at board level to reach minimum requirements and demonstrate continuing progression in terms of the level of women, ethnic minorities, disabled and gay people represented at all levels. This needs to filter across into the procurement process and be a contractual demand of our supply chain too.”

Having a more balanced representation at board level was a crucial part of this. “You come in, you look up – and all you see are 50-year-old white males,” complained Bridget Bartlett of perhaps a similar age.

Companies should place an importance on sponsors and mentors, as they both have an important role to play. “I actually think that a sponsor should be the 50-year-old, white male as their role is to champion you and they are most likely to have the influence and speak the right language to help you up the ladder,” suggested Sarah Davies. “Whereas a mentor should be someone who has a greater understanding of the challenges you face personally, so a female should have a female mentor, for example.”

When it comes to promoting role models, the panel agreed there should not be a focus just on the people who have made it to the ‘top’.

“Rising stars have a crucial role to play when it comes to involving younger people,” observed Siobhan McMahon, Director of Emerald Architects Ltd and National Chair for National Association of Women in Construction. “They can almost ‘touch’ that success and are therefore more motivated as it seems more achievable”

“The discussion highlighted a need for the industry to come together and start tackling the issue of diversity as one,” stated Richard Morey, Group Events Director, Media 10, the company behind UK Construction Week. “I think UK Construction Week could play a pivotal role, in providing a platform for those that are making great strides in balancing out inequality in our industry, to demonstrate best practice and inspire others.”

Picture: A range of topics were dealt with by the UK Construction Week Diversity Advisory Group