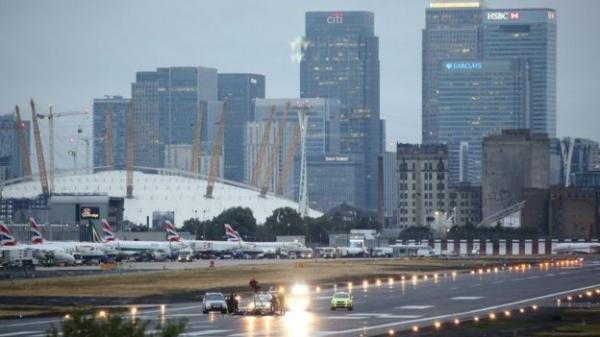 At 11:00am on Tuesday Sept 6, a notice on the London City Airport website still read: 'The runway is currently closed due to protestors on site. Police are present and we will resume normal operations as soon as possible'.

At 5:00am the Metropolitan Police officers (as opposed to City of London Police or British Transport Police) were alerted to a number of protesters who had made their way airside at London City Airport.

In an action remarkably similar to a runway invasion at Heathrow in July 2015 - [Runway Rovers Were Well Organised] - nine people erected a tripod and locked themselves to it together on the runway. Specialist officers arrived to 'unlock' the protestors along with specialist negotiators. By 9:30 officers were able to arrest seven of the nine (suspicion of aggravated trespass; being unlawfully airside; breaching London City Airport bylaws) but only remove two. Work continued to remove the remaining protesters from the runway and all were eventually taken into custody by midday.

City of London Airport's website quickly changed its message to: ' Protestors have now been removed. We are preparing the airfield to resume operations as soon as possible'.

The protesters are from the UK chapter of the Black Lives Matter (UKBLM) movement that has sprung up in the USA and become more active as more 'suspect' killings of young black Americans by the police have been publicised. However, the movement in the US is spreading its net and supporting 'allies' such as Standing Rock Sioux tribe which is blocking a massive oil pipeline project.

The same metamorphosis/identity crisis could be occurring in Britain -  the UK chapter first claimed the London City Airport disruption via Twitter with the assertion that the action was taken to highlight the UK's environmental impact on the lives of black people locally and globally. A UKBLM statement reads: 'Whilst at London City Airport a small elite is able to fly, in 2016 alone 3,176 migrants are known to have died or gone missing in the Mediterranean. Black people are the first to die, not the first to fly, in this racist climate crisis. We note, however, that the UK is willing to charter special flights to remove black people from the country based on their immigration status'.

Joshua Virasami from BLM has told BBC London: "The community where this airport is, is a predominantly black community. In Britain, 28% of black people are more likely to be exposed to air pollution...being in closest proximity to the industries causing climate change."

At the end of July, the City Airport Development Programme received planning permission for a £344 million privately funded expansion project that includes plans for seven new aircraft stands, a parallel taxiway and a passenger terminal extension to allow the airport to take 6.5 million passengers by 2025.

On August 5 this year, on the anniversary of the 2011 police shooting of Mark Duggan (which sparked huge riots and looting across the country), UKBLM members organised lay-down protests that blocked an M4 slip road near Heathrow, the A45 near Birmingham Airport and tram lines in Nottingham. The organisation at that time  said they were commemorating those who have died in police custody; and protesting 'racist police violence'.

On September 3, the Dakota Access company came into violent conflict with the people protesting against a $3.8 billion pipeline's construction. The company has brought in extremely tough looking security guards armed with dogs and pepper spray. If completed, the pipeline would carry about 500,000 barrels of crude per day from North Dakota’s Bakken oilfield to Illinois. The project has faced months of resistance from the Standing Rock Sioux tribe and members of nearly 100 more tribes from across the U.S. and Canada.

Picture: Picture: With thanks to the UKBLM Twitter feed