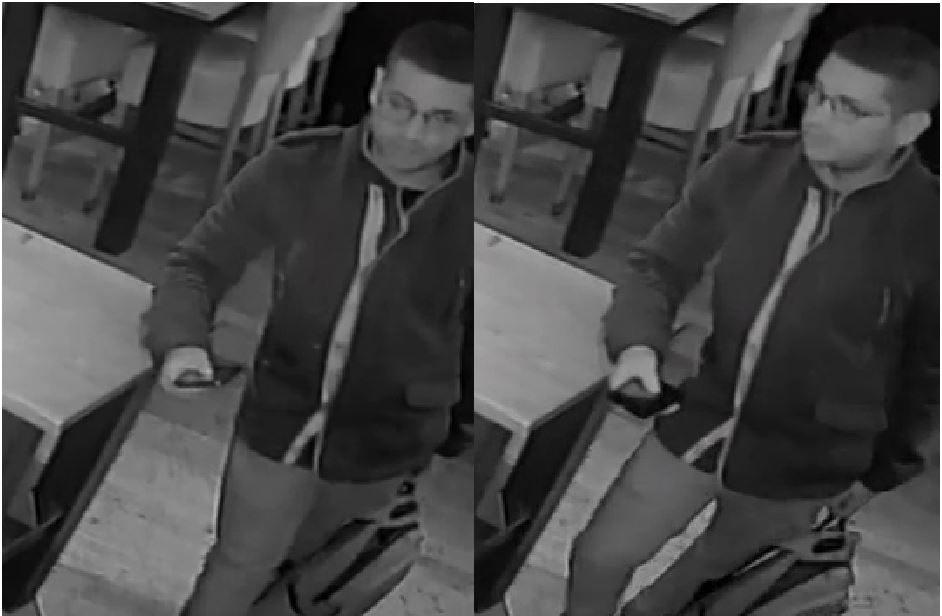 Swinging his leg, our latest video shows an audacious bag thief swapping his own empty bag for a brand new one containing a valuable laptop and iPad.

The unsuspecting victim lost over £1,500 worth of technology stolen when the jerk of a bag thief swiped their rucksack on the fly in a busy pub.

Captured on CCTV, the thief lingers around a group of people having drinks in a pub near Moorgate in the City of London on Thursday 10 October 2019, before using his foot to hook one of their bags from under their chair.

He then drops an empty lookalike rucksack on the ground, before picking up the victim’s bag, which contained a laptop, iPad and some Bluetooth headphones. He then calmly walks out.

Officers from the City of London Police are asking the public if they recognise the thief whilst trying to raise awareness of the tactics being used by criminals in the Square Mile.

Detective Inspector Andrew Clarke said: “Between June and September 2019, we have seen a 43% increase in bag theft, mainly from licensed premises in the City.

“It’s important people keep an eye on their belongings when they are out and about and keep them within reach at all times. It can be easy to think your belongings are safe under a table or under a chair. In reality, a busy pub or bar is the perfect environment for thieves to go unnoticed.

“This particular thief has perfected his criminal activity and even comes equipped with an empty bag to leave in the place of the stolen one."

"We would urge anyone who recognises him to get in touch,” continued Detective Inspector Clarke.

ThisWeekinFM advises all readers that they are free to distribute this content to all staff on their premises.

Anyone with information on this case can call officers on t. 020 7601 2222 quoting reference number 19*544188. Alternatively, independent charity Crimestoppers, can be contacted anonymously via the organisation's website or by calling t. 0800 555 111.

Picture: Two CCTV views of a bag thief. Does anyone in your organisation recognise him? - please circulate this article (via link or any other format) as a warning to all staff on your premises.