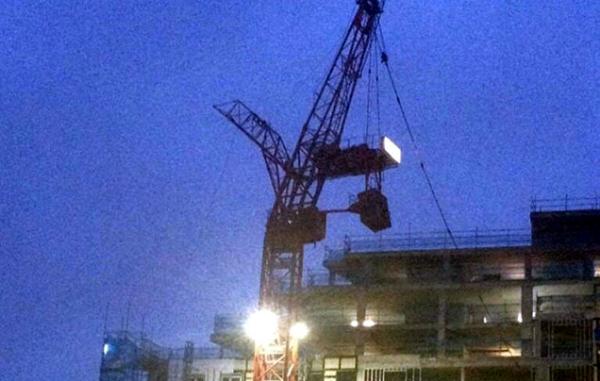 Work on a construction site in West London has been forced to stop after a crane came tumbling down. The accident occurred at St George’s Dickens Yard site on Ealing Broadway in West London at about 3.30pm on Wednesday, when the jib of a luffing tower crane in Longfield Avenue crashed into the half completed building.

According to an eye witness, a portion of the crane was seen broken off and hanging from the rear of the building above busy rail lines.

There were no casualties but the crane driver was treated for shock by paramedics. Three fire engines were sent to the scene of the incident.

A spokesman for St George which is part of the Berkeley Group, commented: "The company is investigating the matter but cannot speculate as to the cause at this stage."

This is the second crane crash in London in a just over a month – the crane pictured above (courtesy Paul Gisby) came tumbling down in Whitehall following the storm that hit the south-east of England at the end of October.