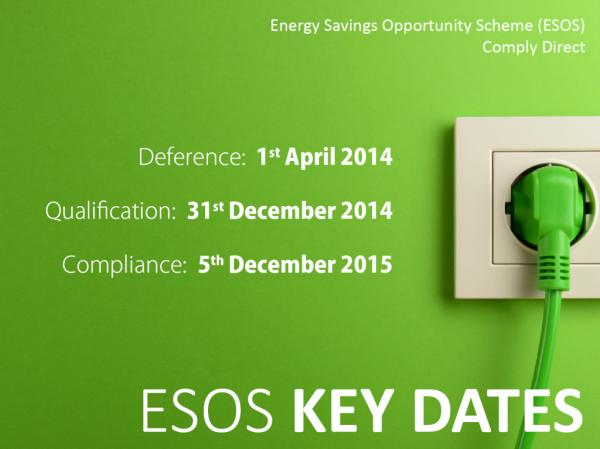 Despite of a general consensus in the summer that compliance to the 5 December deadline would go ahead ESOS compliance has run into difficulties.

The Environment Agency (EA) has now set out its position on enforcement for ESOS in light of the widespread acknowledgement that there are insufficient assessors to ensure compliance for all participants by the deadline.

However, there is a warning that before the deadline to ensure all affected have an auditable plan in place and be compliant by 29 January 2016 to avoid penalties.

The deadline for compliance is set in the EU Energy Efficiency Directive and ESOS Regulations 2014 which will not change. Qualifying organisations that do not complete a compliant ESOS assessment and notify the EA by 5 December 2015 will be at risk of enforcement action including the possibility of civil penalties.

Nevertheless, the regulators are able to waive or modify enforcement action and penalties relating to non-compliance. The EA’s announcement includes details on specific penalties and how it intends to apply them for the first compliance period. This approach includes:

Another aspect is that even more time has been allowed at this stage for completion of ISO 50001 as a route to compliance. The deadline for this has been extended to the end of June 2016. A primary factor in this not being more widely adopted was the perceived unrealistic time frame originally allowed.

Some experts believe that had this been announced earlier in the year, more participants would have taken this route which delivers improvements rather than the audit path that provides recommendations for improvement. With such late announcement of this, it remains unrealistic to achieve this now even with the extension.

If organisations cannot comply fully by 5 December 2015, one specialist that states it can provide advice is Carbon2018, e.g. producing a timeline for compliance and ensuring that lead assessor time is secured in accordance with this and ahead of the 29 January 2016 deadline. For further information, e-mail: compliance@carbon2018.com

Picture: When are key dates not key dates? Perhaps when they are ESOS ones

Stephen O’Hara urges companies to take immediate action on ESOS compliance and avoid enforcement action. I believe the time is right to remind those...