Down Under Comes to Manchester 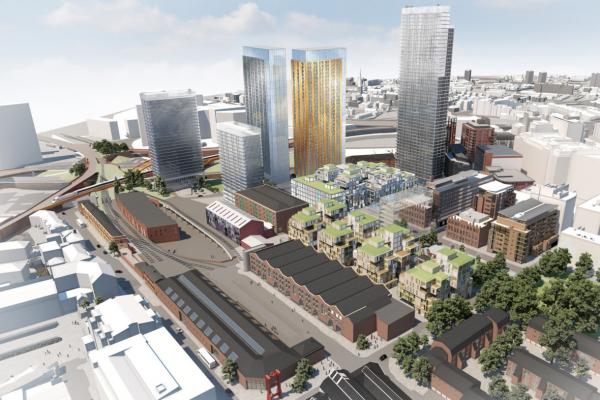 Regarded as the best residential site in Manchester, St John’s Living is to be the brand for Manchester’s first city centre, private rented neighbourhood which together with St John’s privately owned accommodation that is claimed will provide a ‘modern, sustainable and creative neighbourhood for the twenty-first century’.

A number of known firms submitted interesting and informed design ideas for the towers that will sit within the current St John’s masterplan by architect, Simpson Haugh. Denton Corker Marshall was seen as having a ‘significant track record’ in designing buildings for the private rental sector and its submission was seen as demonstrating a strong creative approach to the project.  As a result, it has been appointed by Allied London to prepare a planning application later this year.

Allied London and Denton Corker Marshall have already worked together, designing their first UK ‘statement building’ together to create the award winning Civil Justice Centre in Spinningfields as well as 20 Cannon Street and 28 Savile Row in London.

“Notwithstanding our historic and successful partnership with Denton Corker Marshall, it proposed the best architectural answer to a difficult brief,” stated Michael Ingall, CEO, Allied London. “Designing residential towers in cities like Manchester is a challenge within the context of our design values, ‎so we required very experienced and thoughtful architects who understood our core objectives.”

Picture:   A contract for the design of a massive private rented scheme in Manchester has been awarded by Allied London to Australian architect firm Denton Corker Marshall