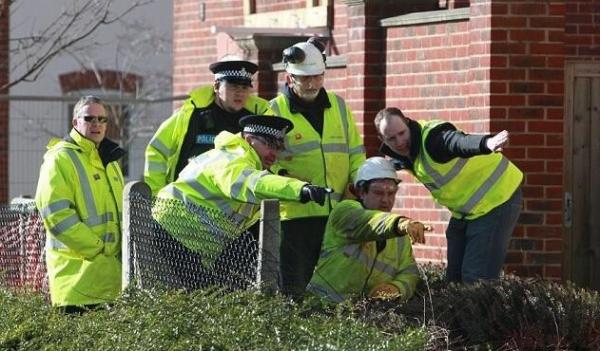 A dramatic weekend of wind and weather has seen more flooding and rising ground water. Sadly a woman has died when a concrete gable fell onto a car, while one fire has caused injury and another has threatened ancient archives. Elsewhere, a giant sink hole appeared in a residential area - begging the question, could this be a phenomenon to hit the UK?

Fire crews tackled a fire in a large warehouse in Canning Town, London on Saturday night/Sunday morning 15/16 February. The roof and a large part of the first and second floors were damaged and crews worked hard to bring the fire under control. Firefighters in breathing apparatus rescued a man from the first floor of the warehouse and he was taken to hospital by ambulance to be treated for burns and smoke inhalation. Station Manager Philip Morton, who was at the scene, said: "The fire was large and it looked dramatic when crews arrived. Firefighters worked hard to bring the fire under control and crews rescued a man who was later taken to hospital by paramedics. The building was badly damaged in the blaze and fire investigators are now looking into what caused it."

Later it was reported that a woman had also been taken to hospital.

Earlier on Saturday, firefighters were called after a blaze broke out at The National Archives building in Kew where some of the most ancient and prestigious British artefacts are stored – including the Doomsday Book. Crews tackled the blaze, which was affecting two disused water towers. No-one was hurt or injured and there is no damage to the main building or any documents. The fire caused significant damage to the water towers and smoke could be seen from the surrounding area.

Clem Brohier, Acting Chief Executive and Keeper at The National Archives said: “The most important thing is that no one was hurt and no documents were damaged in this incident. I have seen for myself today how quickly the London Fire Brigade got here and how staff from The National Archives swiftly put our incident plan into action and the public responded calmly and helpfully. We will reopen to the public on Tuesday 18 February, as usual.”

On Valentine’s Day, Friday 14 February the weekend started with a catastrophic incident that resulted in the death of a woman who was struck by concrete masonry from a building which collapsed onto a car she was driving on Kingsway near to Holborn underground station in London.

Firefighters, who arrived just after 11:00p.m. released a man and a woman from the vehicle but sadly the woman was pronounced dead at the scene. The man, who was sitting in the back of the car, was taken to hospital. Another woman, also travelling in the rear of the car, managed to get out of the vehicle before the Brigade arrived and she was also taken to hospital. Around ten people were evacuated from nearby buildings as a precaution.

A 20.ft deep sinkhole opened up in Hemel Hempstead at the weekend in a residential area that begs the question could this be a phenomena set to strike the UK following the heavy rainfall and rising ground water. Sinkholes are the result of water erosion.

Readers may be interested in this documentary still available on the BBCiPlayer:  www.bbc.co.uk/iplayer/episode/b03tz705/Horizon_20132014_Swallowed_by_a_Sinkhole/

17 houses were evacuated on the advice of structural engineers. According to the BBC, Dr Vanessa Banks, from the British Geological Society, said recent heavy rainfall had led to an increased number of sinkholes.

Craig Shepheard, MD of FM Expert was in the vicinity at the time and was interviewed by the press and later Radio 4.

Here is a link to Craig’s BBC interview. http://www.bbc.co.uk/programmes/b03v9p0g

It could have been a disaster

Mr Shepheard told ThisWeekinFM that the estate had only been built about six years ago and surveys had not revealed any potential trouble. He also stated that a lady in a house not far away had also reported a much smaller sinkhole – about the size of a dustbin lid. Shepheard said: “The trouble with these sink holes is nobody knows they are there, they can simply open up at any time and it seems that surveys will not pick them up until it’s too late.  It’s a real worry for residents – but a huge worry for industrial and commercial property owners. The affected housing estate is on an old warehouse plot about half a mile from Buncefield – imagine the type of disaster if it had happened there or somewhere similar.”

Buncefield is the site of a massive oil depot and the scene of a major explosion and fire in December 2005.

Main picture of sinkhole site courtesy of Craig Shepheard. Above, the aftermath of Buncefield