Dutch Crane Collapse Could Have Been Deadly 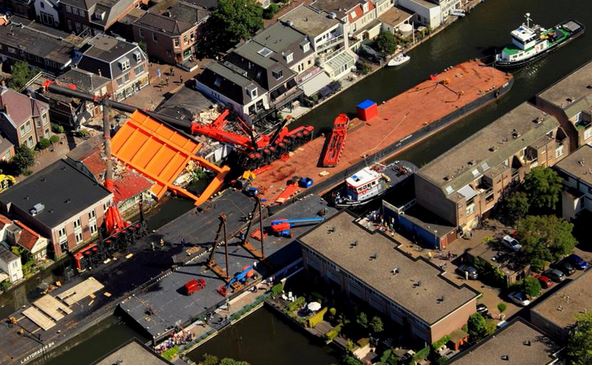 The incident, which was captured on mobile phones and posted to YouTube, saw two cranes and part of a prefabricated bridge they were lifting, topple from a pontoon on the Old Rhine river and on to buildings including domestic apartments and shops.

Dutch News says three people are being treated as ‘suspects’ in the investigation.

"It is much too soon to say if any criminal acts have taken place," public prosecutor Kitty Nooy told reporters. "Treating the three as suspects entitles them to remain silent and to have a lawyer."

Dutch News also reports that Building firm Mourik, which is in charge of the bridge building process, has begun assessing how the cranes and the bridge section can be removed from the crash site.

Dutch broadcaster NOS interviewed crane operator Jan Zwagerman, who said that the cranes were not suitable to be used on pontoons because of the lack of stability. Meanwhile, Delft university professor Frans Bijlaard also  told NOS that no one had taken into account possible problems - "otherwise the properties would have been evacuated before the work began.  People were lucky to escape with their lives."

Picture: With thanks to the the helicopter service of the Dutch Police Force.