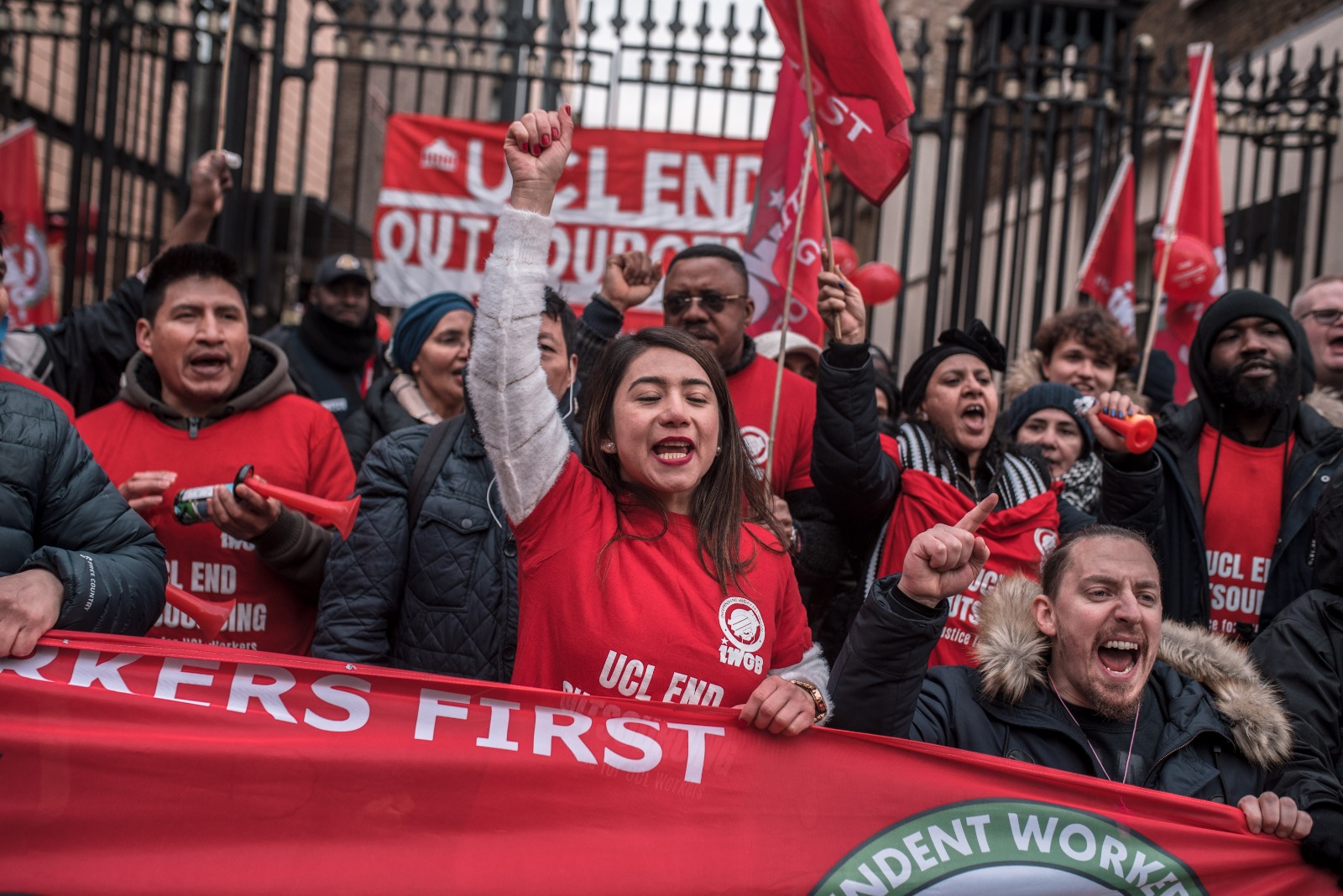 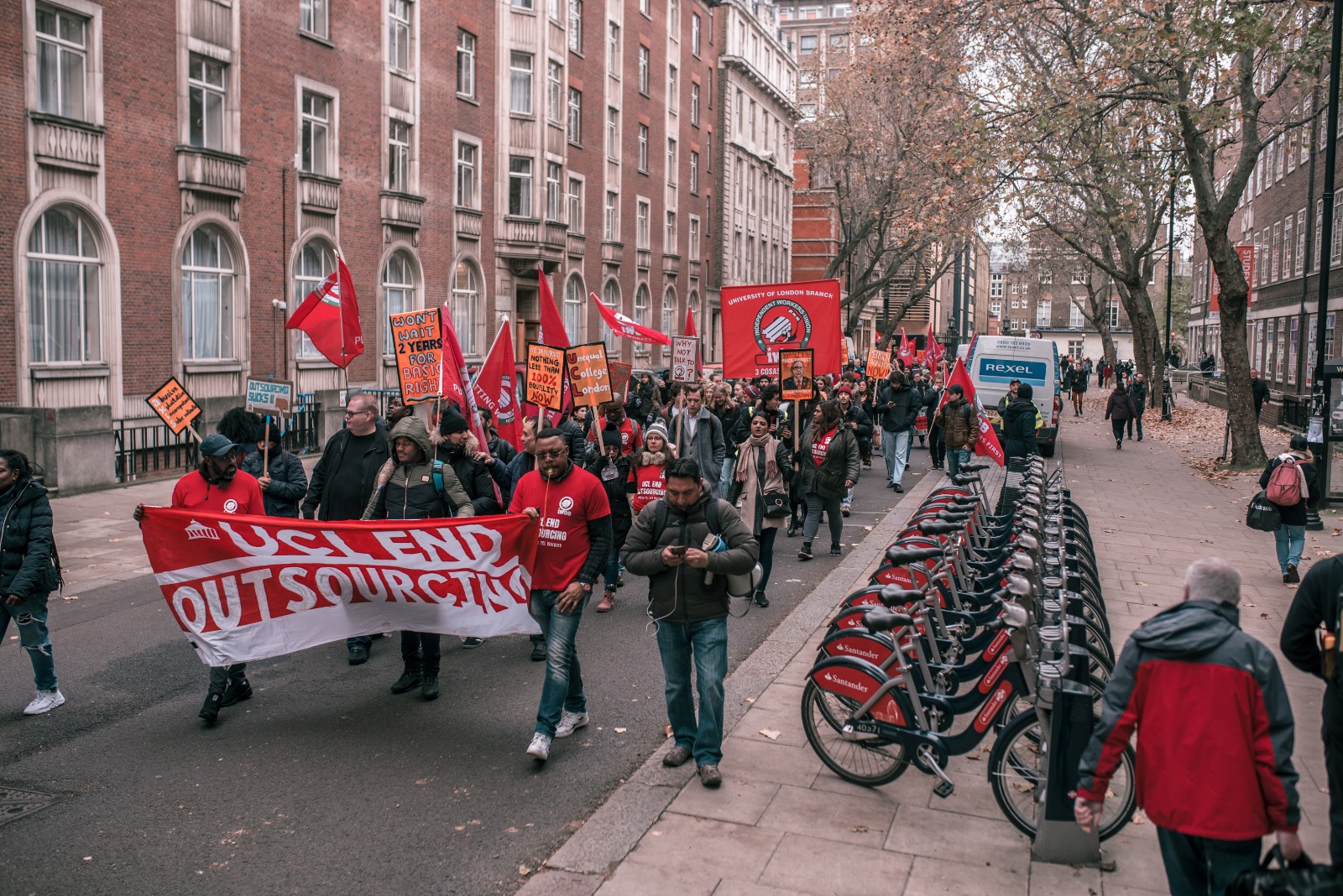 December 4 at 4:00am saw UCL academics join an ongoing 'irrelevant' strike that has already delivered what cleaners, security officers and porters want but not on a timescale they are happy with.

The academics (lecturers and students) were also out on strike in favour of a University and Colleges (UCU) Union dispute.

All told there were about a thousand workers, lecturers, students and supporters (including in-house support staff) trudging through the University College London (UCL) grounds in what was billed as a 'joint strike'.

The protests went on from 4:00am until 1:00pm with people marching to several UCL buildings.

While the two groups of striking workers each have specific demands, they are both a reaction to what they claim are declining terms and conditions faced by university staff.

However, equalised pay and benefits were confirmed for UCL’s security, cleaning, portering and catering staff by the university in October 2019!

Matthew Blain, Executive Director of HR for UCL said: “Our colleagues in cleaning, security, portering and catering do vital jobs for UCL and we are committed to ensuring that they are rewarded fairly in line with all other staff.

“Unison is our recognised trade union and we are pleased that our negotiations have been positive, professional and productive. We will continue to work closely with their staff representatives to ensure that we are able to equalise pay and benefits as soon as we can. We have listened carefully to their concerns and are acting.”

The equalised terms will mean security, cleaning, portering and catering staff not already on equal terms will receive the equivalent of an additional seven days annual leave from 1 December 2019 plus additional leave to cover university closure days.

IWGB has another agenda above equal rights. University of London branch chair Maritza Castillo Calle said: “There is a near consensus at UCL that outsourcing has to end and that all workers should be put on equal terms and conditions, yet management continues to drag its feet. These joint strikes will send a clear message of unity, with all those that keep the university running on the same side of the picket line, while Provost Michael Arthur will be on the opposite side. It’s not too late for management to get on the right side of history and agree to our demands and those of the directly employed staff.”

UCL UCU branch vice president Dr Saladin Meckled-Garcia said: “Our action represents a wholesale resistance to the turning of universities into businesses and commercial concerns, rather than communities of learning and scholarship.

"Our Vice Chancellors are more interested in building new buildings and campuses into which to pack students so as to benefit from their fees.

"We see the struggle of IWGB outsourced workers as continuous with this resistance and that is why we are glad to be on strike with them on 4 December!”

Meanwhile, kitchen porters working at a private members club in Mayfair who were outsourced to Act Clean Ltd and then almost immediately brought back in house, will begin a strike for 48 hours on 11 and 12 December.

The porters are demanding better occupational sick pay and union recognition for the purposes of collective bargaining - supported by the IWGB.

Currently, the porters are on the statutory minimum sick pay, so they get no money at all the first three days they are off work with an illness and then are only paid £94.25 per week. This results in unwell members of staff turning up to help prepare food.