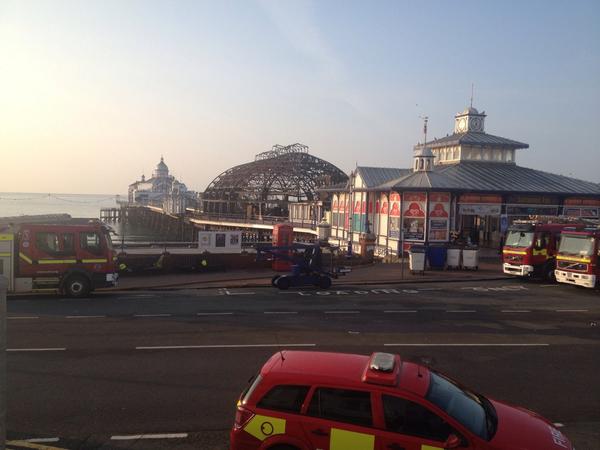 Police investigating the fire that ripped through Eastbourne's historic pier on Wednesday afternoon (July 30) have confirmed that they are now treating the incident as suspicious.

Detective Inspector Mark O'Brien said: "As a result of our investigation we have received information to suggest that the fire may have been started by someone, either deliberately or accidently and our investigation is now focusing on that line of enquiry.

"A temporary scaffold platform has been erected adjacent to where the fire is thought to have broken out in order to enable scenes of crime officers and fire investigators safe access to the area.

"In the meantime, we are very keen to hear from anyone who has photographs or video taken at the entrance or actually on the pier in the hours before the fire started."

Superintendent Laurence Taylor added: "The area around and under the pier is still very hazardous and there is a security team deployed to stop people putting themselves in danger. Parents have been asked to keep a close eye on their children whilst on the beach and local residents are being advised of the dangers."

East Sussex Fire and Rescue Service continues to work with police on the investigation.

TWinFM spoke to a fire expert over the weekend who said: "Eastbourne Pier should act as a reminder to anyone operating buildings where the public have access en masse that they need to be aware of the possibility of deliberate or accidental fires being started. They need to have solid evacuation plans and plans to tackle a fire before it gets out of hand. Sadly, I don't suppose Eastbourne (Pier) had a sprinkler system installed.

"Initially it was suspected that an electrical fault had caused the blaze - a natural conclusion if you know that cleaning regimes are not up to scratch and equipment - such as fruit machines - are running off plugs. Many fires start when dust ignites at sockets. I have advocated that machines that one might see on a typical pier should be 'hard wired' and not running off a 13amp plug."

Previous reporting by our South of England Correspondent

East Sussex Fire and Rescue Service crews have spent the night at the scene of the Eastbourne Pier fire and are still tackling remaining hot spots. They were called out yesterday (Weds 30 July) at 15.13 and at the height of the incident 80 firefighters were tackling the fire from the shoreline, from the water and from underneath the Pier.

As of 06.30 this morning, around 20 firefighters are continuing to damp down to ensure the fire is completely out. They have been assisted overnight by lifeboat crews in order to reach the remaining hot spots.

It is expected that the operation will be further scaled down within the next few hours.

An investigation is underway and the cause has not yet been established despite conjecture by a council leader that the fire was started by an electrical fault in the arcade.

A large section of the Pier remains unaffected by the fire but there has been substantial damage to a number of small buildings and the large arcade has been left a shell. There are no reports of injuries.

Chief Fire Officer Des Prichard said: "Pier fires are notoriously difficult to fight because there is one way on and one way off - and the tide can caused additional problems. The hard work of our firefighters has paid off in that we have been able to save a section of this iconic landmark but I know for the people of Eastbourne, this will still be devastating.

"I would like to thank everyone who has been involved in this operation. We have had great support from other organisations including the RNLI, Coastguard and the police. Our own firefighters were determined to do all they could. We are now investigating the cause of the fire."

Picture with thanks to Annemarie Field