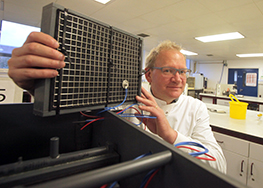 Turning raw sewage directly into electricity sounds just too good to be true but it’s an area that’s generated a lot of research around the world in recent years. Now, a team from Newcastle University and Northumbrian Water have taken the idea to the next level with a plan to install specially designed microbial electrolysis cells at a water treatment works in Tyneside which should be able to do just that.

Treating wastewater and sewage is an energy-expensive business. It accounts for up to 2% of a developed nation’s annual energy bill but experts estimate that the stored chemical energy contained in sewage could be be as much as nine times greater than the energy cost of processing the stuff.

A fact that water companies, in Europe at least, have not been slow to appreciate. Anaerobic treatment processes where bacteria digest the sewage sludge, turning it into biogas that can burnt to produce electricity or cleaned and fed into the gas grid are now widespread among water authorities, and power plants that use the remaining dried sludge or “cake” as fuel have been around for decades.

But this latest Tyneside twist on turning excrement into energy cuts out the middle-man altogether and uses the raw sewage to generate electricity directly. The process makes use of a naturally ocurring bacteria type – exoelectrogens -- which have evolved to be able to transfer electrons extra-cellularly, which means they “spit out” electrons as they digest the sewage.

By housing these microbial generators on a special carbon felt fitted into frames through which the raw sewage is pumped, then attaching a positive and negative, the microbial electrolysis cell is in business. The bugs get busy digesting the sewage, spitting out electrons as they go to the cell’s positive anode, thereby producing electricity. Meanwhile hydrogen gas, the ultimate green fuel, can be collected from the other end of cell, the cathode, and used for other types of energy production.

Last month, meanwhile, scientists at Stanford University in the US described their own version of a sewage-powered microbial battery and claimed that trial versions could extract up to 30% of the potential energy contained in wastewater.

A ‘safe’ collection system for catering, food and hospitality industries has been launched   Fatboxx, from Peter Ridley Waste Systems, is a wheeled...