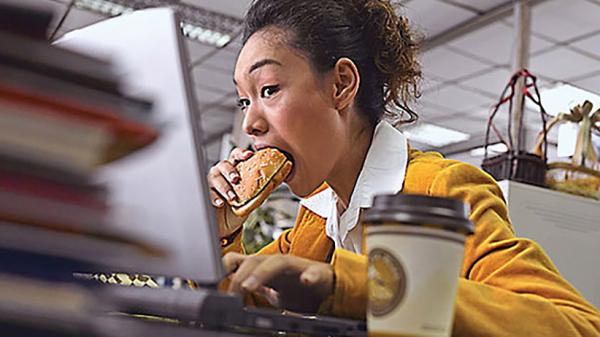 New research by a money saving website in the UK has discovered that over one-third of workers in Briton have to eat breakfast, lunch and dinner at work at least twice a week. Furthermore it was found that on average Britons work 12 hours more per week than they are contracted too.

The team at www.VoucherCodesPro.co.uk conducted the research as part of an ongoing study into the average Briton's working day. A total of 2,015 UK-based workers aged 18 and over, all of whom stated they were in full-time work, were quizzed about their average working week. Respondents polled in the study were from a wide variety of professions.

Initially all respondents were asked how often they found themselves working unpaid overtime in order to complete their assigned work. 87%, the majority, stated they worked over their working hours ‘very frequently - at least once a week’. Following on from this, participants were asked if this overtime was voluntary; 61% told researchers it was, whilst the remaining 39% admitted they felt pressured by their employers or manager to work the extra, unpaid, hours.

Researchers then asked ‘Roughly how much overtime do you work in a typical week?’ The collated results showed that the average worker worked 12 hours more than they were contracted too. All respondents were then asked ‘Do you often have to eat meals at work?’ to which over one third (34%) confessed that they consume all three of their meals within their work environment around twice per week.

George Charles, spokesperson for www.VoucherCodesPro.co.uk, said: “There is such a thing as too much work and when you find yourself eating breakfast, lunch AND dinner at your workplace, it should probably be a warning sign that you’re pushing yourself too hard. I am all for voluntary overtime on occasion in order to prove to employers how motivated and dedicated to your career you are but when you begin to have no time for yourself or a social life that’s just not okay.

“Some professions obviously do call for longer hours such as doctors, but this is why we have to treat them with the upmost respect. Eating all three of your meals in a massive rush while standing up or sitting at your desk isn’t healthy or fun.”

Picture: Takeaway but no getaway from work

The controversial employment practices of Sports Direct has come under the spotlight with news of ambulances being called to its warehouse ‘dozens of...

The British Heart Foundation (BHF) has urged employers to help workers kick-start a healthier lifestyle during Heart Month following a study that found worrying facts on...