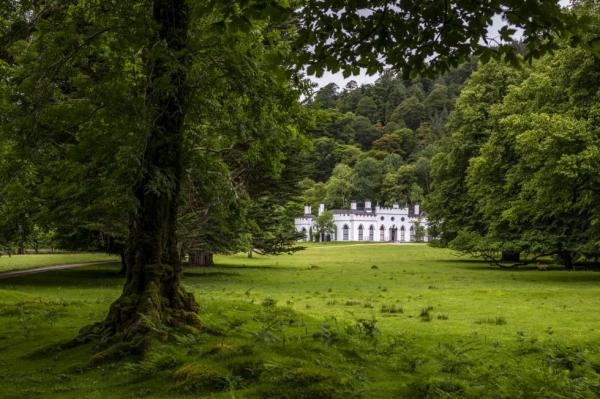 One of Ireland’s most historic buildings is for sale - the Guinness castle near Dublin.

In recent history, the castle housed Guinness heiress Oonagh, Lady Oranmore and Browne, one of the three 'golden Guinness girls' who entertained lavishly and whose guests have included the Rolling Stones, Anjelica Huston (who grew up next-door), Lucian Freud, and U2’s Bono.

The castle, named Luggala, is on 5,000 acres and lies within its original 18th-century gardens surrounded by old Irish oaks, emerald lawns, heather and wildflowers overlooking the dark blue water of Lough (Lake) Tay.

Though not of massive proportions and tall spires, Luggala, a former hunting lodge, is comprised of 19,099 square feet of living space with a total of 27 bedrooms and 18 full baths.

With its low-lying crenellated roofline, the whitewashed structure makes a striking statement against the dark-wooded backdrop. Leaning toward Gothic style, it is awash with little battlements, crochets, trefoil and quatrefoil windows and ogee mantelpieces throughout.

Structures on the property include the main house with seven bedrooms, dining room, large entrance hall, three main reception rooms and library, a four-bedroom guest house and another 17 bedrooms between seven lodges and cottages within the estate.

The Guinness Castle is valued at $29.5 million or about 28 million Euros.