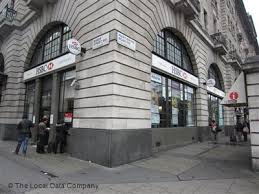 Three men were arrested on 3 October, as the Flying Squad wound their way down to Baker Street in connection with the robbery of a security guard as he delivered cash to a bank in central London.

At around 04.50am the guard was assaulted as he walked from his van to the HSBC Bank (pictured) in London's Baker Street.

The male robber was able to snatch a cashbox from the victim but was immediately arrested by Flying Squad officers in an intelligence led operation.

A short time later, two further men were arrested at addresses in north London on suspicion of conspiracy to commit robbery. All three men remain in custody at a central London police station.

Four fire engines and around 20 firefighters attended a fire at a disused hospital building on Grafton Way in Bloomsbury, yesterday afternoon (Thurs oct 2). Six people left the building before the arrival of the Brigade and were treated for smoke inhalation by the London Ambulance Service. Around two tonnes of rubbish and two lift cars at basement level were completely damaged by fire.

Firefighters from Lambeth, Soho, Dowgate and Islington fire stations attended the incident. The Brigade was called at 1:30pm and the fire was under control within two hours. The cause of the fire is under investigation.

A gang who targeted and violently attacked a security guard delivering cash to HSBC bank on Baker Street, W1 have been found guilty of conspiracy to commit robbery. A...

Following our earlier report, we can now reveal that detectives from the Metropolitan Police's Flying Squad (aka The Sweeney) have taken over the investigation into a...

Following our earlier report, we can now reveal that detectives from the Metropolitan Police's Flying Squad (aka The Sweeney) have taken over the investigation into a...

The Metropolitan Police Service has joined forces with the business community to combat crime and anti-social behaviour in the Southbank and Westminster Bridge...