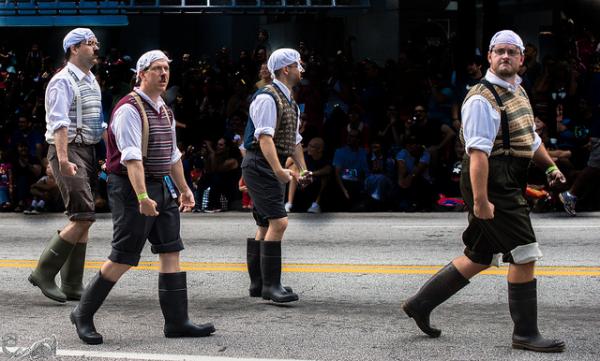 According to the GMB union this morning (June 23), a Watford hospital worker has been suspended for rolling his trousers up on the hottest day of the year.

Apparently workers in Watford General hospital who asked their managers for permission to wear three quarter length trousers because of the intense heat were told to keep wearing their normal black combat trousers.

But on Wednesday 21, a safety representative, Michael Wood, disobeyed orders, was caught doing so and was suspended from work. Disciplinary action may follow. Wood had engaged in an argument and categorically refused to roll his trouser legs back down again. Mr Wood's hospital porter colleagues had joined him in a the roll-up - but Mr Wood was the only one suspended.

The GMB claims Wood and his colleagues have been unfairly treated by private contractor, Medirest and that they and the hospital made inadequate provisions for workers during the intense heat wave.

Medirest is a multinational company tha amongst other activities supply porters and cleaners to Watford General Hospital.

A GMB spokesperson told ThisWeekinFM: "There is no legislation in place for working in hot temperature and the guidelines only require an employer to act reasonably. Medirest have distributed instructions on where to get a drink of water in the hospital.

"However, the union feel that more rest breaks, bottled water and shorter three quarter length light trousers would assist the workers working in temperatures of more than 30 degrees.

"Instead of providing shorter or lighter trousers Medirest insisted that the normal black polyester combat trousers must be worn. This hard line approach to workers safety follows in a series of industrial relations problems with Medirest at Watford General.

"Recently two workers were suspended for five weeks for refusing to work in a dangerous way with unsafe equipment."

Good will is dead

Michael Dooley, the GMB local representative, also said: “The porters, who are paid minimum wage, are expected to continue working as normal in the searing heat whilst managers sit in air conditioned offices.

"Because of the unusually high temperatures, the NHS managers in Watford General have adopted a reasonable approach towards their workforce.

“However, Medirest consider suspending safety reps is the preferred option, this of course may intimidate other workers into submission to ensure compliance.

"The spirit of good will and cooperation seems to have died in Watford General hospital.

“Many workers are fasting for their religious observance and the excessive heat will no doubt compound their hardship.

"Mr Wood has been treated unfairly in our view and should be reinstated immediately and a sensible resolution should be brought about.”

Picture: With thanks to Monty Python's Mr Gumby - who looks stupid now - the safety rep who would not roll his trousers back down during the recent heat wave or the managers who have suspended him?