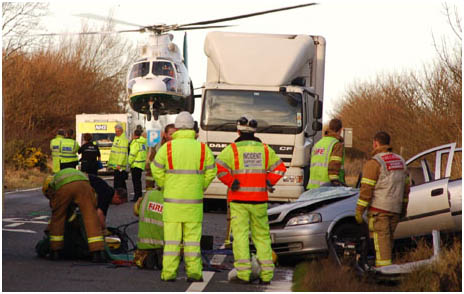 Two organisations involved with road safety have accused the government of complacency and poor funding for an increase in injuries and deaths on the UK’s highways.

The criticism comes from road safety charity, Brake, and the Institute of Advanced Motorists (IAM) particularly scathing of the current coalition government’s lack of action

Brake has expressed ‘dismay’ at an increase in road casualties announced this week (Reported Road Casualties in Great Britain: Quarterly Provisional Estimates Q3 2014 – Department of Transport) and is demanding that all political parties commit to three ‘vital’ road safety policies, especially to protect pedestrians, cyclists, children and young people. The figures show that deaths and serious injuries on UK roads increased by 4% in the year ending September 2014, with deaths up by 1%.

“It is disappointing that after many years of solid falls in the numbers of people killed and injured on our roads, the government has taken its eye off the ball,” said Neil Greig, Director, policy and research. “These figures reflect our view that cuts in visible policing and road safety spending has had an impact, with a third successive quarter of increases. We have had pretty much two decades of falls in the killed/seriously injured (KSI) figures, and while these new figures can in no way be regarded as a trend, they are a big concern.”

For its part, Brake is calling on all political parties make the following commitments:

“These casualty increases are the tragic result of a failure of ambition,” accused Julie Townsend, Deputy CEO, Brake. “They come on the back of three years of flat lining road death and serious injury figures, during which the government congratulated itself on having ‘some of the safest roads in the world’, rather than making forward thinking decisions and setting targets to secure further reductions.”

IAM also blames what it sees as cuts in ‘visible’ policing and road safety spending as having had an impact, with the third successive quarter of increases. “The government has been ‘riding its luck’ to an extent, and that the recession has played its part in artificially making the figures seem better than they really are,” stated Mr Greig. “Recent transport ministers have been lucky. The recession had slowed traffic growth, new car technology has delivered safer roads year on year and most accident black spots have now been engineered out of existence."

Blood On Their Hands - Government Criticised On Road Safety

Two cars belonging to Mihomecare were involved in separate vehicle incidents last week. The reasons why two Skoda Citigos, owned by the care provider and part of the...