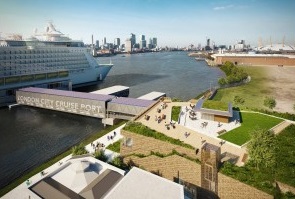 A new cruise liner terminal that will bring thousands of tourists to the capital every year was given the green light by the Mayor of London’s on Tuesday August 25.

Up to 55 cruise ships a year are expected to dock at the new terminal at Enderby Wharf in Greenwich as part of a scheme that will create up to 500 new jobs and also includes 477 new homes, a skills academy, restaurants, cafes and bars.

The new terminal is expected to be up and running by 2017. It will help London become a destination for cruise ships and will allow London to become the starting and finishing point for worldwide cruises for the first time.

Planning permission was originally granted in 2012 for a passenger terminal on the Enderby Wharf site, however new European legislation that came into force earlier this year required cruise operators to stay for longer in London with vessels starting and ending trips in the capital.

Lister, said: “We have worked with the local authority and the developer to ensure the new terminal and surrounding infrastructure will meet the needs of thousands of tourists coming to the city each year.

“It will provide a major boost to tourism, benefit the local economy and further contribute to London’s status as a world leading city.”

All ships using the Enderby Wharf terminal must comply with international, national and local emissions legislation, which requires vessels to burn less than 0.1 per cent sulphur emissions. EU regulations mean all cruise liners must swap fuels when they reach regulated waters, which requires them to burn low sulphur on their approach to London and while in port, resulting in a 97 per cent reduction in emissions.

The Mayor’s office also asked an independent air quality consultancy, Amec, to study the impact of emissions. While it recognised there could be some moderate adverse impact on occasion, it also acknowledged the height, speed and heat of ship emissions disperse more efficiently in comparison to motor vehicles. Recognising the levels of background pollution already experienced in the borough, £400,000 has been secured towards ongoing environmental monitoring or improving air quality through the Royal Borough of Greenwich’s Air Quality Action Plan.

A low emissions transport scheme has also been secured to minimise construction and operational traffic.

Richard Howson, chief executive of integrated support services company, Carillion has stressed that sustainability is a vital ingredient for business success in...