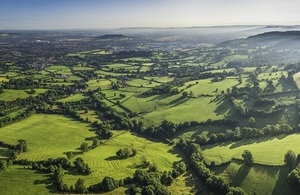 In an unusual show of unity and accord, four Conservative MPs have managed to get together without contradicting each other to launch the UK's Clean Growth Strategy Greg Clark, Michael Gove, Jesse Norman and Claire Perry The Clean Growth Strategy sets out an ambitious blueprint for Britain’s low carbon future.

The Clean Growth Strategy sets out how the UK plans to lead the world in cutting carbon emissions to combat climate change while driving economic growth.

To give it it's full name, ‘The Clean Growth Strategy: Leading the way to a low carbon future’, builds on the UK’s progress to date. Carbon emissions in the UK have fallen further than any other nation in the G7 - since 1990, emissions are down by 42% while the economy has grown by 67% (it is claimed), which is a barometer of industrialisation that might normally be expected to increase carbon emissions. (Editor's Note: It should be noted that the growth in the UK has many drivers, not least of which is based in financial services - areas that would not be expected to increase carbon emissions.)

The government’s strategy sets out how the whole country can benefit from low carbon economic opportunities through the creation of new technologies and new businesses, which creates jobs and prosperity across.

Business and Energy Secretary Greg Clark said: "This government has put clean growth at the heart of its Industrial Strategy to increase productivity, boost people’s earning power and ensure Britain continues to lead the world in efforts to tackle climate change.

"The British government is leading the way on taking decisions on new nuclear, rolling out smart meters and investing in low carbon innovation. The world is moving from being powered by polluting fossil fuels to clean energy. It’s as big a change as the move from the age of steam to the age of oil and Britain is showing the way."

Climate Change and Industry Minister Claire Perry said: "The impact of the Paris agreement and the unstoppable global shift towards low carbon technologies gives the UK an unparalleled opportunity. By focusing on Clean Growth, we can cut the cost of energy, drive economic prosperity, create high value jobs and improve our quality of life.

"The government’s actions to reduce carbon emissions, through support for renewable energy and energy efficiency measures, have helped to reduce average consumer energy bills and more than offset the cost of government support for low carbon technologies, and the costs of key technologies such as offshore wind is plummeting.

"Over £2.5 billion will be invested to support low carbon innovation from 2015 to 2021. This funding covers programmes delivering low carbon energy, transport, agriculture and waste.

"That £2.5 billion of existing government spending includes up to £505 million from the Department for Business, Energy and Industrial Strategy’s Energy Innovation Programme, which aims to accelerate the commercialisation of innovative clean energy technologies and processes."

Gove said: "We are determined to be the first generation to leave the environment in a better state than we inherited it. Achieving clean growth is an integral part of our work to deliver a Green Brexit.

"Through our plans to tackle waste, better manage our precious natural resources and create a more environmentally focused agricultural system, this government is taking the lead in creating a cleaner, greener Britain."

Transport Minister Jesse Norman said: The Clean Growth Strategy reinforces our clear commitment to reduce emissions across the UK and to end the sale of all new conventional petrol and diesel cars and vans by 2040.

"We are a world leader in ultra-low emission technology, spending £1 billion to support the uptake of these cleaner vehicles and the creation of one of the best charging networks in the world. Advances in low carbon transport technology can significantly boost economic growth and air quality, and we will continue to work with companies to maximise these benefits for all."

Measures set out in the Strategy include funding through the BEIS Energy Innovation Programme of:

Further measures include commitments to:

Develop a package of measures to support businesses to improve their energy productivity, by at least 20% by 2030

Demonstrate international leadership in carbon capture usage and storage (CCUS), by collaborating with our global partners and investing up to £100 million in leading edge CCUS and industrial innovation to drive down costs

Improving homes. Support around £3.6 billion of investment to upgrade around a million homes through the Energy Company Obligation (ECO) and extend support for home energy efficiency improvements from 2022 to 2028 at least at the current level of ECO funding

Develop a long term trajectory to improve the energy performance standards of privately-rented homes, with the aim of upgrading as many private rented homes as possible to Energy Performance Certificate Band C by 2030 where practical, cost effective and affordable

Spend £1 billion supporting the take-up of ultra low emission vehicles, including helping consumers to overcome the upfront cost of an electric car.

Develop one of the best electric vehicle charging networks in the world.

Work with industry as they develop an Automotive Sector Deal to accelerate the transition to zero emission vehicles.

Invest around £841 million of public funds in innovation in low carbon transport technology and fuels.

Phase out the use of unabated coal to produce electricity by 2025.

Provide up to half a billion pounds for further Contract for Difference auctions for less established technologies, such as offshore wind, with the next one planned for spring 2019.

Work with industry as they develop an ambitious Sector Deal for offshore wind, which could result in 10 gigawatts of new capacity, with the opportunity for additional deployment if this is cost effective, built in the 2020s.

Deliver new nuclear power through Hinkley Point C and progress discussions with developers to secure a competitive price for future projects in the pipeline.

Establish a new network of forests in England including new woodland on farmland, and fund larger-scale woodland and forest creation, in support of our commitment to plant 11 million trees, and increase the amount of UK timber used in construction.

Work towards our ambition for zero avoidable waste by 2050, maximising the value we extract from our resources, and minimising the negative environmental and carbon impacts associated with their extraction, use and disposal.

Publish a new Resources and Waste Strategy to make the UK a world leader in terms of competitiveness, resource productivity and resource efficiency.

Picture: This green and pleasant land