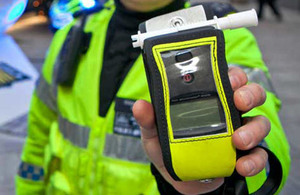 Drink drivers will learn about the dangers of drug driving as part of a new pilot course.

The Department for Transport is trialing the addition of drug driving education to the existing rehabilitation courses in England and Wales for people convicted of driving while over the alcohol limit.

About 1,000 offenders will attend the combined courses which have been introduced after figures show a fifth of convicted drug drivers had previously been banned for drink driving.

The Road Safety Minister, said: "We have introduced tougher penalties for drink and drug driving. Getting behind the wheel while under the influence of drugs can have catastrophic results, for drivers and passengers and can ruin families’ lives.

"Educating offenders of the dangers of drug driving will help prevent it in the future.

Ken Skates, Economy and Infrastructure Secretary at the Welsh Government said: "Whilst the number of casualties on Welsh roads has nearly halved since 1999, every casualty is one too many. It’s vital that all ways of further reducing dangerous driving and the casualties that stem from it are explored in full. That starts with education and providing clear information that can prevent re-offending wherever possible. Driving whilst under the influence of alcohol or drugs is reckless and I am delighted that Welsh Government are supporting this pilot which will benefit our roads and communities here in Wales."

Rob Manfield, outgoing chairman of the Association of Drink Drive Approved Providers of Training, added: "We know that some drink drivers also use drugs. This pilot provides a great opportunity to intervene and educate drink drivers, so when they get their licence back they will have a much greater knowledge of the risks both drink and drugs pose to themselves and other road users."

Since the introduction of new rules around drug driving and easier testing in March 2015, around 7,000 drivers have been banned compared to 879 in 2014.

Rehabilitation courses allow first time offenders to be educated about the impacts of drink driving on themselves, other road users and the emergency services.

Drink drivers in court are offered to attend a rehabilitation course in return for a lesser fine and shorter ban.

The courses will be run until the end of March 2017. The results will then form the basis for a consultation next year to make these rehabilitation courses available for drug drivers.

Taking the Pledge for Safety

Road safety charity Brake has launched training courses throughout the UK to help companies improve the safety of their at-work drivers. Working with the support of...