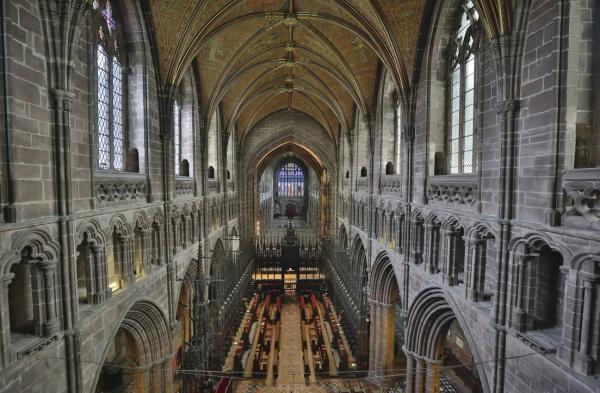 Chester Cathedral has earned a Trip Advisor Excellence Award since opening the Cathedral at Height project to the public in April last year.

The success follows an increase in footfall at the cathedral of 350% and the reward of welcome additional revenue from over 7,500 ‘intrepid explorers' with the project winning an award in the Chester Civic Trust's New Year Honours List 2015.

Work began in Summer 2013 and involved the cathedral tower, tower roof, bell ringing chamber and bell-frame chamber's preparation for public access. It was officially opened in September 2014 by The Prince of Wales and The Duchess of Cornwall, Earl and Countess of Chester.

Visitors can now enjoy accessing areas of the Grade I listed cathedral previously unseen by the public after The tour of the cathedral includes high level, panoramic views of the city and five counties.

"This complicated project involved very real challenges for the design team to provide safe access and open up previously unseen areas of the cathedral,” explained Tony Barton, Chairman, Donald Insall Associates. “It involved new balustrades, viewing platforms, lighting, handrails, staircases and interpretations. The challenges were overcome by the design team and contractors to deliver the project on time and on budget."

Picture:    The Cathedral at Height project at Chester Cathedral allows visitors access to areas of the Grade I listed cathedral previously unseen by the public.

The Construction Products Association (CPA) has forecast construction output will increase 5.5% in 2015 but that growth is expected to slow in the following two years due...

A report highlighted by the BBC says that the Palace of Westminster urgently requires refurbishment - but politicians are avoiding the issue like a pre-election banana...