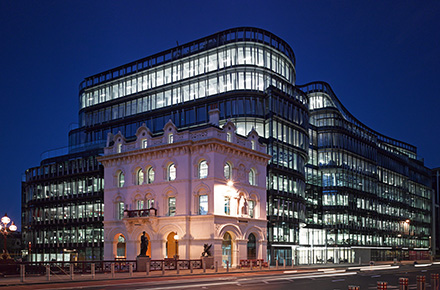 According to the wharf.co.uk, detailed plans for Canary Wharf Group's latest tower have been submitted, with French bank Societe Generale reported to be considering it for its headquarters. The bank is said (by The Times) to have abandoned a development opportunity in Spitalfields in favour of the expanding Docklands.

Tower Hamlets Council approved (outline) plans in April for 1 Bank Street - which will occupy one of the last tranches of development space left throughout Heron Quays West.

1 and 10 Bank Street are two halves of a 'split' tranche - original planning permission was sought for a single development which was revised during the property downturn. Speculators now say the two projects are more valuable as office space demand is on the rise.

The design of 1 Bank Street (by Kohn Pedersen Fox Associates Architects) sees an enlarged 'foot' and a dramatic curved glass facade. The proposal has 19 office levels and three trading floors - suggesting a banking client. It will also have five plant levels - suggesting that an element of high-frequency trading is expected.

According to The Construction Enquirer, Adamson Associates is acting as executive architect with a consulting team made-up of Arup as structural engineer and Hilson Moran as mechanical engineer.

Kohn Pedersen Fox Associates Architects has a reputation for some impressive worldwide designs - particularly those with sustainable characteristics. The firms Wheelock Square, in Shanghai, was recently awarded LEED Gold certification. The 61-story office tower incorporates various sustainability features - including a Low-E glass facade that maximizes natural light penetration into the building and helps prevent heat loss; water-saving taps throughout the building, fresh air intake on all floors a 24/7 management system that manages energy usage, and connection to the Jing An MRT station.