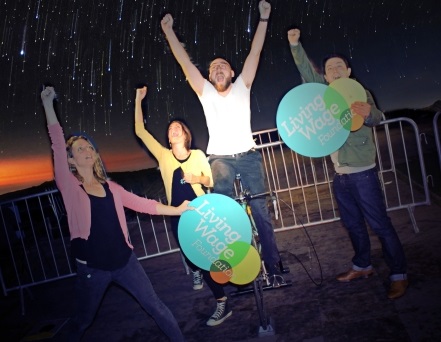 The start of Living Wage Week saw London Mayor Boris Johnson announce the new London Living Wage being set at £9.40 per hour - an increase from £9.15 to £9.40.

Although the rate had been revealed on Saturday Oct 31, the Mayor waited until Monday (Nov 2) to hold a press conference at which he said the number of employers now paying their staff the London Living Wage has grown from 429 to 724 in the last 12 months. This compares with just 27 employers who publicly backed the Living Wage in 2008.

The UK Living Wage rate increase was also announced on Monday (Nov 2), with campaigners calling for more businesses to go beyond legal minimums - a reference to the government hijacking the term Living Wage and applying it to a Minimum Wage.

The announcement will see a pay rise for approximately 68,000 staff that are employees of the accredited businesses that commit to paying all their staff, including sub-contracted teams working on their premises, at least the Living Wage.

Research produced this year by the University of Strathclyde and the Living Wage Foundation highlighted the benefits to businesses that come from paying the Living Wage. As well as boosting the wages of staff, it can reduce staff turnover and absenteeism, increase worker morale and loyalty, boost productivity and enhance the reputation of an organisation.

The London Living Wage announcement was made at a central London Oliver Bonas store. Oliver Tress, founder of Oliver Bonas said: "It makes complete sense to pay all our team the London Living Wage. We want to pay a wage which both rewards our team for their hard work and loyalty and reflects the ‘real’ cost of living. We were the first retailer on the High Street to make this commitment and would encourage others to do so too."

Tim Munden, HR Director at Unilever UK said: “As a company committed to making sustainable living commonplace we believe it is right to raise the floor on wages. That is why we have been committed to paying our UK employees at least a living wage for some time. We have taken the natural step in gaining accreditation from the Living Wage Foundation; it underlines our commitment to a living wage approach across our supply chain and it will ensure that hundreds more people working with us will be paid the Living Wage by the end of next year.”

Neil Jameson, a director of Citizens UK said: “Citizens UK member communities have been acting on this issue for well over a decade to champion the Living Wage and encourage those businesses we believe can, to pay their staff enough to live on. Whilst huge gains have been made with increased numbers of organisations signing up, the fact remains that nearly 6 million workers, that’s 23% of the UK’s working population, earn less than a Living Wage.

“Life on less than the Living Wage is better described as survival; when living becomes the challenge of trying to exist from one pay day to the next, what room does that leave for family life, for faith or for learning?”

The Living Wage announcement came in tandem with research released by KPMG, a principal partner of the Living Wage Foundation, which details the number of workers across the UK earning less than a Living Wage, as well as breaking down the areas across the country where low pay remains prevalent and highlighting the sectors paying the lowest rates of pay across the UK.

The Living Wage Foundation has launched an online interactive map detailing for the first time, all the accredited businesses and their branches that pay their staff at least the Living Wage, so consumers and businesses can easily search for a Living Wage accredited employer to do business with or buy from. The map and materials to help Living Wage supporters are available at www.livingwagemovement.org.

The legal minimum an employee can earn in an hour.  Employers break the law if they fail to pay this rate. The national living wage rate will be £7.20 an hour for the whole of the UK. This will increase each year, with the aim of reaching 60% of the median wage across the country by 2020 (this would mean around £9 an hour but the Low Pay Commission will consider what the market can bear). Different rates apply depending on the age of the employee. The ‘national living wage’ is for over 25s only.