How an App is Going to be Quite Apt 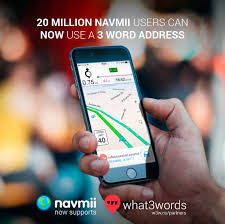 Navmii will be partnering with what3words to integrate its 3m x 3m square address system into its navigation App.

In coming to this arrangement, Navmii, the free navigation and traffic app, it will have what it terms as a ‘complete ‘integration of what3words, the global grid of 57 trillion 3m x 3m squares – each assigned a unique three-word address.

These addresses have been added to the Navmii map, allowing users to discover and navigate to areas without a postcode or where a postcode is inaccurate as well as direct friends and family to specific 3m x 3m meeting points.

What3words has defined every single 3m x 3m square on the planet by a this three-word address that can be shared, claiming it can be done ‘quickly, easily and with no ambiguity’. To use a what3words address on Navmii, the three-word address in entered into Navmii’s search bar, or to discover an address location on the map, the user zooms in and taps on the desired location.

“Postcodes and addresses only go so far,” said Peter Atalla, CE, Navmii. “Consider Wembley Stadium and its numerous entrances – the what3words integration means that if a Navmii user wants to meet friends at the south west side of the stadium, all they have to do is enter ‘mostly.scared.swing’ into the search bar and Navmii will take care of the rest.”

Picture: The tie up between Navmii and what3words should make navigating much simpler