Hydrogen - the Salvation of Worlds? 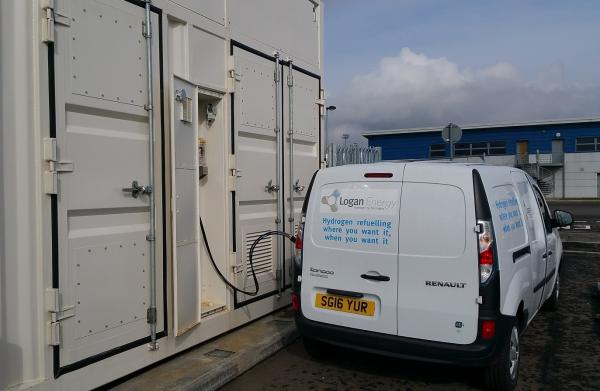 The successful installation of hydrogen technologies at the Levenmouth Community Energy Project represents the dawn of a new energy era, according to specialists Logan Energy.

The Edinburgh based company has designed, supplied and installed a hydrogen based energy storage systems and two mobile hydrogen vehicle refuelling units at Methil, in Fife, Scotland.

The renewables industry is becoming increasingly important to energy supply. Scotland has recently produced more electricity from renewables in a single day than it used. However, energy storage is required to match production with demand. Hydrogen is one of the key solutions to this dilemma.

Logan Energy believes this project is a turning point in positively proving the case for hydrogen as a key clean energy solution.

Bill Ireland of Logan said: “At Levenmouth we have delivered what many visionaries have been talking about for some time and shown that it can be integrated into the existing energy systems for stationary power and transport needs."

The energy balancing system comprises a 250kWe Proton Exchange Membrane (PEM) Electrolyser, a gas storage arrangement and a 100kWe PEM fuel cell. Coupled with a smart control system, the energy balancing is achieved by generating and storing hydrogen when there is excess renewable energy available. The hydrogen is then used to power the fuel cell to provide power to the private wire network at times when there is insufficient renewable energy being generated.

The mobile refuelling units are self-contained modules, based upon ISO shipping container dimensions, so they can be readily transported and relocated from site to site. These are used to refuel Europe’s largest fleet of hydrogen hybrid vehicles which includes vans and refuse lorries.

Hydrogen is stored at the site and reconverted to electricity at times when on-site wind and solar generation is low, helping to offset the intermittency of renewable energy as well as being compressed and stored for 350bar refuelling of vehicles.

Logan Energy will maintain the newly-installed systems for the next five years during which information will be gathered and assessments made on the performance of the different technologies implemented.

Bill Ireland added: “Seeing just a snapshot of the potential of hydrogen becoming a reality here in the UK is a tremendous step forward."

Parking Chargers on the Increase

The operator of the largest electric vehicle (EV) charging network in the UK, Chargemaster, has taken responsibility for operating and maintaining all 124 charging points...