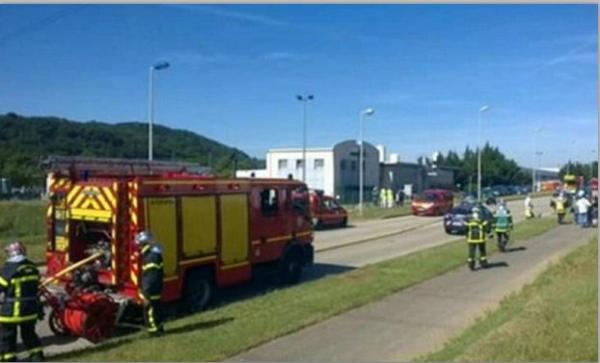 According to the BBC and The Guardian news website, a man has been beheaded and at least one other person injured in a suspected Islamist attack on a factory near the French city of Lyon.

ThisWeekinFM has learned that the factory produces gas cylinders. The attackers drove into the premises with gas bottles in their vehicle - improvising them to ignite a large explosion involving the cylinders and possibly the industrial gas feed.

The French government has called for heightened security at potential targets - including those that incorporate potentially explosive environments. Security in France is still high at sensitive targets such as schools. Police are on high alert with fears of a co-ordinated plan in the Lyon area...or across the country.

The government has already convened a taskforce to treat this as a terrorist attack. There will be a French Defence Council meeting at 15:00 in Paris. President Francois Hollande has already left and is on his way back from the EU summit in Brussels. Prime Minister Manuel Valls will cut a trip to South American short to return to Paris. Bernard Cazeneuve, the French Interior Minister  has said the arrested man was known to the police as a Muslim radical in 2006 but but had fallen under the radar as long ago as 2008.

Prime Minister David Cameron has conveyed his sympathies to President Hollande over what appears to be an appalling incident in France.

The BBC says the factory is that of Air Products in Saint-Quentin-Fallavier. BBC Radio says there were two attackers at the gas factory, one of whom has been arrested. The station says the police are unsure why a small out of town factory would be a target.

Associated press has reported that a man had been arrested and that the suspected attacker entered the factory and set off several small explosive devices.

A tourist hotel has also been at attacked Sousse in Tunisia. A Shia mosque to the east of Kuwait City has suffered a suicide bomb blast.

Picture: The scene of the attack with thanks to The Guardian.