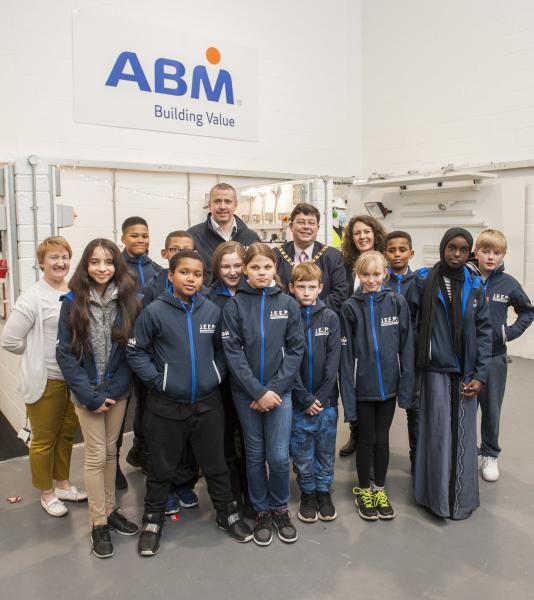 36 West London schoolchildren (from three London Borough of Ealing secondary schools: Northolt High School, Brentside High School, and Featherstone High School) and their parents came to the launch. The 36 will be the first on to the scheme, supported by a team of educational experts delivering an immersive syllabus (developed in association with ABM UK) which will be encourage them to think differently about engineering - and an engineering based career.

Running from January to July 2018, the pilot programme will engage pupils in engineering and facilities management with interactive sessions. Topics covered will include electrics, cooling and sustainability. There will be field trips to London’s Heathrow Airport and Transport for London’s train maintenance facility which will explain how engineering plays out in a career setting.

At the end of the programme the children will be awarded a certified qualification from industry body, the British Institute of Facilities Management, which will work as a credit towards an apprenticeship or further course should they decide to pursue a career in the industry when they leave school.

The initiative comes just days before The Rt. Hon. John Hayes CBE MP was due to host a Parliamentary Reception

ABM's move recognises that despite government initiatives such as The Apprenticeship Levy and the introduction of T levels, businesses have a responsibility to safeguard the future, too.

The Programme's vision originated from group managing director, Andy Donnell, who started his career as an apprentice electrician when he was 16-years old. Donnell successfully worked his way up the career ladder to oversee the acquisition of Westway Services (now ABM UK) by American services giant, ABM.

Donnell, says: “This industry has an image problem that we need to change. People either don’t know about the opportunities that facilities management and engineering offer or they think it’s about oily rags and no prospects. This couldn’t be further from the truth; in fact, these technical roles are in such high demand that graduate apprentices are earning between £26,000 and £30,000 just a year after qualifying…and they have no debt!

"As an industry, we have a responsibility to start attracting fresh, young talent. We believe that the J.E.E.P is a fantastic first step towards doing that. But it can’t be a flash in the pan. Making the industry appeal to the next generation of talent is a monumental challenge and changes won’t happen overnight. This is why we see this as a long-term, industry-wide campaign."

Getting other companies involved

ABM UK has already had support from generous suppliers and clients who see the value in taking action. And the company will be looking at competitors for their involvement as the initiative develops.

Following the pilot, ABM aims to take the J.E.E.P on tour in a bespoke mobile hub – a state-of-the-art double-decker bus that will take the excitement and opportunity of engineering and facilities management to children across the country, in their own environments.

Linda Hausmanis, chief executive of the BIFM, said: “For many years the demographic time bomb facing FM has been much lauded and finding ways to encourage young people into FM as a career of choice has been a long-held ambition of the Institute.  I wish the 36 young people every success with the programme. Who knows, one day one of them may be heralded as the 'FM Newcomer of the Year' just like Conrad Dinsmore was at the BIFM Awards 2017."

Picture: December 04 evening saw ABM?UK welcome 36 West London schoolchildren and their parents to the launch of its first-ever Junior Engineering Engagement Programme at its employee training centre in Greenford, Middlesex

The latest inducement for you to visit the Facilities Show has been sent by the organisers...learn how you can succeed despite the challenges you may face in your FM role...