Key is Under the Mat and Code Stuck to the Wall 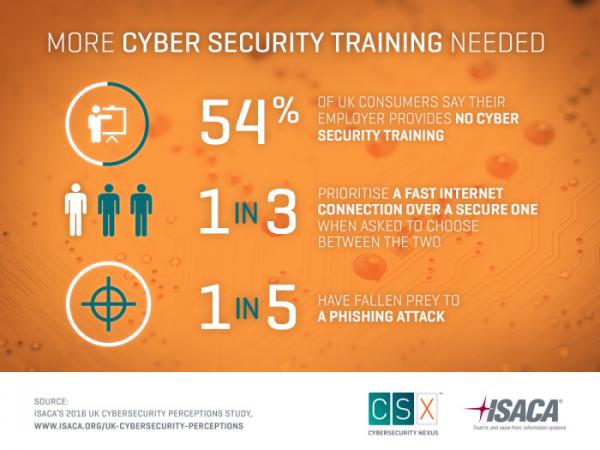 You wouldn't invest in security for your home and then leave the key to the front door under the welcome mat and the alarm code written on a post-it note and stuck to the wall next to the control panel. Yet this is effectively how some people treat their IT security.

The Cyber Security Perceptions study found that 14% of respondents have used an easy-to-guess password to save time, 16% have shared their password with others, 15% have used a USB stick that wasn’t theirs, and 11% skipped the opportunity to use multi-factor authentication because it wasn’t convenient.

The study also revealed that more than one in three respondents (36%) say they could not confidently define a phishing attack - a scam in which someone poses as a reputable organisation in email, IM or social media messages in order to solicit information - and one in five (19%) have fallen prey to phishing emails. Additionally, when asked to prioritise between a fast internet connection and a secure one, 1 in 3 chose speed.

The Cyber Resilience Report, recently published by the Business Continuity Institute, revealed that two-thirds of organisations experienced a cyber security incident during the previous year and 15% experienced at least 10. This shows that the cyber threat is very real and organisation s need to take it seriously, and this begins with educating employees so they know what they can do to help prevent an attack from happening.

“It is critically important that we create awareness in cyber security and in multiple roles within an organisation,” said Christos Dimitriadis, chair of ISACA’s board of directors. “The human factor is critical when creating cyber security capability, and education based on practical guidance is key to reducing the related business risks.

“Consumers are confident - perhaps overly so - in their own abilities to keep their data safe. But these findings show that a gap exists between perception and reality. By failing to educate employees, organisations are leaving themselves more vulnerable to attack,” said Dimitriadis. “Ransomware, for example, is a fast-growing threat and phishing attacks are commonplace. Employees should be taught what these terms mean and the role they play in defending against them. Starting with better education and training in the workplace, we can help to improve safety and security online.”

Picture: Startling figures from the survey

After things went hugely pear-shaped at the Oval from a security perspective, major football grounds have revealed the extent of their Counter Terror (CT)...