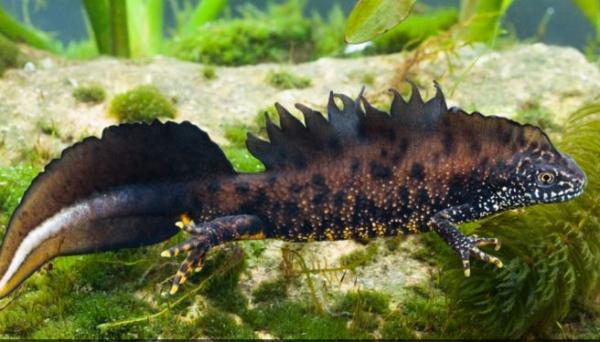 The Great Crested Newt is an endangered species under European law but in the UK there's lots of them. So Natural England, the government body that issues guidance on wildlife protection, has looked at changing the rules so that identifiable colonies are still protected but not every individual Great Crested Newt.

Natural England first experimented with the plan in Woking in Surrey and has now ended a national consultation on April 7.

The pilot schemes represents a milestone in Natural England’s drive to reform regulation and to make it easier for industry to observe environmental laws and achieve more for the natural environment. It move the organistion from tackling the challenges of Great Crested Newts on development sites in a reactive site-by-site approach to one that sees a bigger picture and ultimately has greater benefits.

The pilot in Woking also sought to establish a planning and licensing framework which could be adopted for other protected species and other areas of the country.

Andrew Sells, chairman of Natural England said: "The current licensing system for European Protected Species in England is quite a rigid way of protecting Great Crested Newts, placing the emphasis on individual newts, rather than the species as a whole. By making the system more flexible and strategic, it will enable us to establish habitat for great crested newts, where their populations will most benefit from being in a wide network of habitat, rather than being squeezed in around a development."

The current system for protecting Great Crested Newts will not alter the fact that the creatures, their eggs and their breeding sites and resting places are protected by law. You may be able to get a licence from Natural England if you’re planning an activity and can’t avoid disturbing them or damaging their habitats (ponds and the land around ponds).

What you must not do. Things that would cause you to break the law include:

You could be sent to prison for up to 6 months and be fined £5,000 for each offence if you’re found guilty.

You need a mitigation licence if your work will have impacts on Great Crested Newts that would otherwise be illegal and you need to provide a reasoned statement to show that the activity fits the criteria and that there is no satisfactory alternative. You will also need references to show that you have employed an ecological consultant and s/he has the necessary experience

Excavating the ground, for example to renovate a building, maintaining or restoring ponds, woodland, scrub or rough grassland; restoring forest areas to lowland heaths; ploughing close to breeding ponds or other bodies of water; removing dense vegetation and disturbing the ground; removing materials like dead wood piled on the ground; filling in or destroying ponds or other water bodies

Building and development work can harm Great Crested Newts and their habitats, for example if it:

You won’t need a licence for many cases of standard pond management works but you will need to plan the work well to minimise the risk of deliberate killing, injuring or disturbing newts.

Your work should normally be carried out in late autumn through winter, typically between early November to late January, when great crested newts are least likely to be present in ponds.

This time period varies per pond because some adults may live in some ponds in winter or in some cases newts may leave the pond much earlier. If you have to do work in the summer months, eg because of ground conditions, then you’ll almost certainly need a licence.

You should remember that large machinery can damage habitat and hibernacula. You must not deposit the silt removed from ponds on areas used by great crested newts.

You should immediately stop work if you find great crested newts in the pond before or after you start work if you’re doing pond management work without a licence. You should start your work at a different time or do it in a different way to avoid harming the newts. If you can’t avoid harming the newts then you’ll need to get a conservation licence.

Activities you don’t need a licence for

Activities you can do that wouldn’t break that law include: rescuing a great crested newt if it would die otherwise; doing work to a pond during the winter when no great crested newts are likely to be present.

Picture: Crest fallen - will the Great Crested Newt get less protection? With thanks to Dave Kilbey and froglife.org