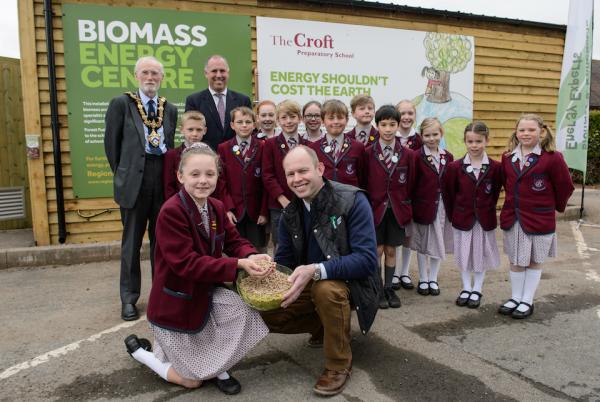 One of the UK’s leading preparatory schools, The Croft School in Stratford Upon Avon, has taken a step towards becoming zero-carbon with 100% funding it received for biomass boiler systems.

It was made possible by the Biomass ESCO scheme that means that all of the operation and maintenance of the system is fully taken care of with the school only required to purchase heat as required.

Officially opened by the Mayor of Stratford-Upon-Avon, Cllr Ian Fradgley, the school’s new biomass system has replaced the old oil-fired boilers and it is predicted that it will reduce the annual CO2 emissions by 20,000kg per year.

Other benefits are said to be:

“This is a marvellous addition,” said The Croft School’s Director of Project Development Barney Thornton, “as it has given us the chance to massively reduce the amount of fossil fuels we use. As a forward-thinking school it’s important for us to set a positive example to pupils about the benefits of using sustainable energy and it’s great that we can do this without huge financial risk.

“Outsourcing the operational risk of our boilers and simply buying heat as we need it is transformational,” said Barney Thornton, Director of Project Development, Croft School. “The Forest Fuels’ Biomass ESCO has made it possible for us to have a brand new boiler system without any capital investment which was particularly attractive to us with aging fossil fuel boilers. What made it most appealing though was the fact that all future maintenance and repairs are taken care of, so we’ll have no unknown costs or resources.

Lumicity, a leading specialist in developing renewable energy, has succeeded in delivering the UK’s largest ever distributed heat project, refitting over 40% of...