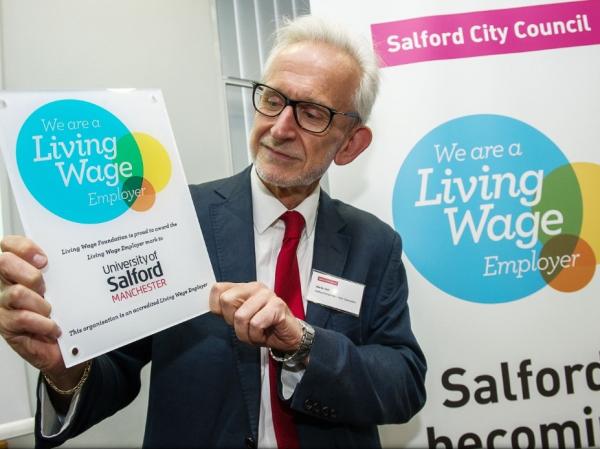 The Living Wage involves about 60,000 workers and 1,000 businesses and organisations and this week sees the London rate rise to £8.80. In the rest of the country the rate increased by 20 pence to £7.85 last week. (The Living Wage is set by the University of Loughborough.)

The rises mean that the Living Wage is 21% higher than the mandatory Minimum Wage set by the government which recently raised the rate to £6.50 for adult workers.

This still means that there are approximately five million workers who get paid less than the voluntary scheme - or 22% of the working population - according to a report just published by the consultancy company, KPMG. KPMG has given further impetus to the campaign for the living wage and is involved in Living Wage Week which started yesterday and runs until November 8. The Week is being recognised nationally to emphasise the need for the scheme to grow with government and employers.

The government has been accused of dragging its feet over implementing the scheme more widely, including its own departments. While Vince Cable, Business Secretary, has stated that his department will commit the scheme, the HMRC has refused to contemplate it. In a statement it said: ‘HMRC greatly appreciates the work cleaning staff do in our buildings and all cleaning staff are paid above the national minimum wage. As cleaning staff are employed by an external contractor who sets the terms and conditions of their employment, HMRC has no control over their pay.’

The view is not shared by London Mayor, Boris Johnson, who has maintained his support for the Living Wage which has been operated by the Greater London Authority since 2005. “Paying the London Living Wage is not only morally right but makes good business sense too,” he said. “There are now over 2,200 employees working for companies with contracts from the GLA who are benefiting from the London Living Wage.”

Since its inception in 2001, the Living Wage Foundation has estimated that ‘over £210 million extra has gone into the pockets of some of the lowest paid workers in the UK’.

There has been a recent surge in support from the private and public sectors for the scheme. Citizens UK, the community body behind the Living Wage, has stated the number of companies paying the rate had more than doubled in the past year.

With the upcoming General Election in May next year, the opposition parties have been positioning themselves on it. The Green Party has called for an immediate rise to £10 an hour and for it to rise with the cost of living thereafter. The Labour Party has said that it will offer tax breaks to companies who sign up to the scheme as well as having a firmer line on government departments and the welfare of those working for subcontractors.

Picture: More organisations and businesses are signing up to the Living Wage which increased in London this week and in the rest of the country at the end of last month