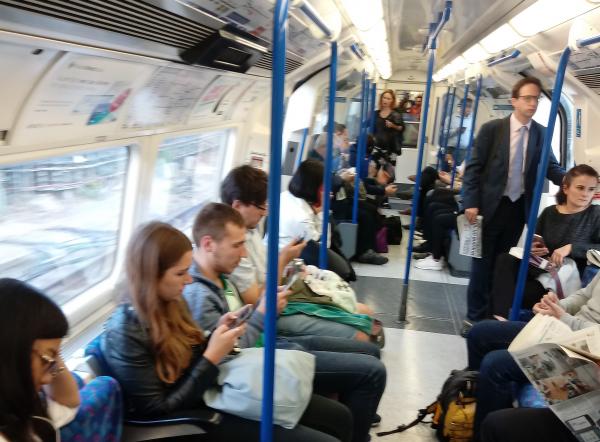 New research from the GMB shows how average journey times to work have slowed down over the last five years.

The study, which is based on the latest official statistics, shows that the average commute from home to work increased from 27 to 29 minutes between 2011 and 2016.

For the UK’s 16 million drivers, this equated to up to 14 extra hours behind the wheel last year, or 230 million hours shared between all drivers. Rail passengers endured the longest average journeys, with the average passenger facing a gruelling 66 minute commute to work.

Bus and motorbike journeys to work suffered some of the biggest increases in commuting times.

Eight of the areas with the ten longest average commutes were in London.

The union said today that worsening congestion, insecure employment, unaffordable housing and the Government’s failure to invest in transport networks were all factors in the slowdown.

Enjoy your phone while you wait

At least if you are stuck on the tube - or indeed want to broadcast pictures as smoke engulfs you from a burning train, the Mayor of London has some good news as he has announced a package of measures to boost digital connectivity across the capital - including on the Underground.

Sadiq Khan wants to tackle London’s areas of poor connectivity and has announced a City Hall summit to bring together local authorities and help them apply for government funding to tackle the problem above ground.

Meanwhile, Transport for London is working to bring mobile connectivity to London Underground tunnels – one of the most high-profile not spots in the country.

London is widely regarded as Europe’s leading technology hub, with a growing sector of over 40,000 digital technology businesses employing almost 200,000 people, as well as major bases of many leading global tech companies. But while the capital leads the way in tech growth, there are parts of the city where slow and unreliable broadband is a source of concern and frustration for businesses and residents alike, such as in Rotherhithe and parts of Westminster and the City of London.

The Mayor's new Not-Spot Team will be going out to London’s most problematic connectivity spots, to work with local authorities and providers to identify and deliver solutions to improve connectivity.

Meanwhile, the Elizabeth Line will have mobile coverage when it launches through central London in December 2018, giving continuous phone coverage and access to the Internet, apps and email as trains move through tunnels across the network.

TfL will shortly be issuing a formal notice seeking feedback from the industry on how it can best take advantage of its underground and street-level assets to improve connectivity across the capital, while also generating a commercial return.

David Leam, infrastructure director at London First, said: “Business needs fast and reliable connections across our capital – in the office, for people working from home and when they’re on the move. We should be making the most of existing infrastructure, including the London Underground network, to boost speeds and deliver coverage to areas that have been left behind. But we also need London’s planners to get behind this work, otherwise our digital ambitions risk being strangled by red tape.”

Both the London Fire Brigade and Ambulance service were called at about 9:00am along with a  Hazardous Area Response Team.

Two of the four people treated were eventually taken to hospital. A mobile phone video (available below) shows passengers evacuating the train as it pulled in to Oxford Street. Photos show people on other platforms aware of smoke but not evacuating - in fact they were taking pictures and videos on their phones.

Commuters further down at other nearby stations were able to smell smoke filtering through the tunnels.

Twitter Katie Watts‏, wrote: 'Just got off the tube at Oxford Circus and the train across the platform was on fire, got evacuated out'. Another Tweet reads: 'Great job @TfL Oxford Circus staff quick and safely evacuated us. Thank you! #Bakerloo #OxfordCircus. Morgane HF‏ @morganeheyne  wrote: 'Lots of first responders at Oxford Circus tube station this morning. Fire on the bakerloo one. Hope everyone is fine. Ellie Bancroft   @EllieBanners : 'Just force to run up escalators and out of #OxfordCircus station. Lot of panicked people. There was a carriage full of smoke'. Tanya J.‏ @thefoundbird  shouted-out: 'Shout-Out to ME today - trapped in a tunnel underground for TWENTY mins and I *didn't* have a panic attack!'

The London Fire Brigade Tweeted: 'We're currently at #OxfordCircus after reports a fire alert on a Bakerloo Line train. Station is currently shut - updates soon @LondonFire'. And London Ambulence Tweeted: 'We have treated four patients for smoke inhalation following an incident on a Bakerloo line train at #oxfordcircus this morning'.

"Our staff immediately contacted the emergency services, who quickly attended, and ensured customers left the train and exited the station. The cause of the smoke was an electrical fault under one of the carriages, which resulted in a small fire that was quickly extinguished.

"Understandably this was a distressing incident for our customers, for which I give my sincere apologies. A comprehensive investigation into how this incident could have occurred is now underway.

"Our Sarah Hope Line, which is set up to help those affected by incidents on the transport network, is also available to offer support."

August 11 also saw four fire engines and 21 firefighters called to a fire at a restaurant with flats above in Queensway, Bayswater London. Part of the ground floor, first floor and staircase of the building were damaged by fire.

The restaurant's extraction system from the ground to fourth floor was also damaged. Eight people left the building before the arrival of the Brigade and there were no reports of any injuries.

The cause of the fire is believed to have been due to a build up of grease in the ducting. A London Fire Brigade spokesperson said: “Restaurant and take-away owners should always take care to make sure their extraction systems are kept clean as a build up of fat and grease within the filters can lead to a fire.”

The previous evening (Aug 10) at 10:20 four fire engines and 21 firefighters and officers were called to a fire in an underground car park in Queensway, Camden.One car was damaged by the fire and a small part of the building was also damaged.

The cause of the fire is not known at this stage. It was under control by 10:35am and the station reopened shortly after.

Picture: Internet on the Tube