Macmillan the Winner as Ball is Declared a Success 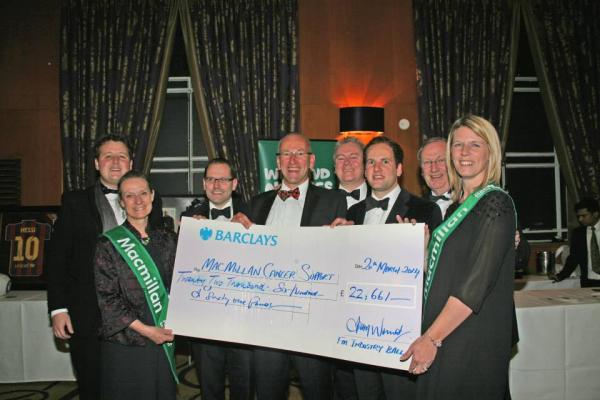 The inaugural FM Industry ball which was held last night was a sell-out success, with over 400 leading players in the sector dancing until dawn and raising over £22k for Macmillan Cancer Support through a charity auction.

The event was supported by a large number of companies including Mayflower, Acorn Maintenance, Skanska, Sodexo, Norland, Morphose, RICS, BIFM and of course, ThisWeekinFM (or Spotted Cow Media Limited as the company is known) who all booked tables.

Lynn Hyder at Macmillan Cancer Support, said: “This event has raised an incredible sum of money which will make an enormous difference to the lives of people affected by cancer. The £22,000 raised could fund a Macmillan clinical nurse specialist, a large information centre and a family support worker for a whole month. These three services provide a diverse range of help and support to people affected by cancer and will help to ensure that even more people receive support at a time and in a way that is right for them. Thank you to everyone involved.”

Jeremy Waud, explained: “The idea was to hold an industry wide, fun, black tie evening in London without a direct affiliation to any industry trade bodies or media organisations. There were no event sponsors – this was an event held by the industry, for the industry and its chosen charity.”

Anyone unable to donate yesterday evening but who would like to do so are reminded of the leaflets handed out at the event. All other donations are gratefully received at www.macmillan.org.uk/Donate

Anna Devlet, Head of Community at British Land, writes about the importance of community at this time, and how the power of local partnerships with suppliers, colleagues...

he Mayor of London, Boris Johnson, is rolling up his sleeves and grabbing a paint brush to help some of the thousands of volunteers tidy up neglected parts of the city in...