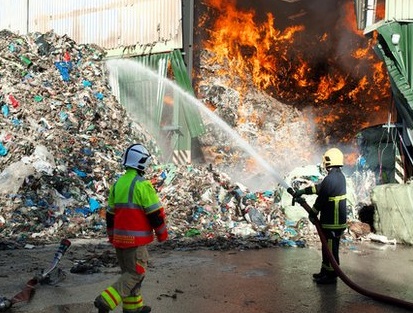 A fire that started at a recycling plant in Salford, Manchester (Duncan Street) just before Midnight on Sunday is now under investigation – while firefighters remain on the scene.

Tony Hunter, Area Manager for Greater Manchester Fire and Rescue Service, said: "The fire resulted in a lot of smoke, which moves as the weather changes so we had to ask anyone who could see the smoke outside to keep their windows and doors closed as a precaution. We have let the building burn out in a controlled way because this was the quickest way of bringing the incident to a close and ensure it had less of an impact on the environment. Firefighters are likely to be on hand at the site for a number of days.”

The Fire and Rescue Service worked with partner agencies to reopen a number of the roads affected by the fire – some were back in use on Monday evening, while others could not be re-opened until Tuesday. Liverpool Street, Middlewood Street and parts of Oldfield Street re-opened on Monday, while Oldfield Street remained closed between Liverpool Street and Regent Road due to smoke drifting across the road.

People with asthma and other respiratory conditions may be particularly susceptible to smoke and should carry and use their medication (such as inhalers) as usual.

40 firefighters were sent to contain the fire which was so severe, the crews' main focus was to prevent the risk of the building collapsing by cooling it and to ensure the blaze did not spread to any nearby businesses or the railway line. Firefighters used breathing apparatus as they moved thousands of tonnes of mixed waste bales out of the way with an excavator. Rail services nearby were temporarily suspended for a while. Once they were up and running again, a speed restriction of 20mph was put in place.

Picture with thanks to Greater Manchester Fire and Rescue Service

The Chairman of Greater Manchester Fire and Rescue Authority has renewed calls for national legislation on sprinkler systems in the UK as crews continue to battle a huge...