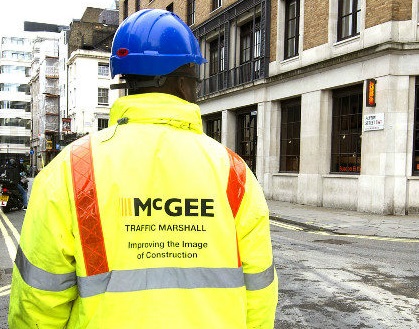 Traffic Marshalls are in place at each of McGee’s site entrances to ensure that any impact of construction traffic on local roads is managed. Whilst primary duties include directing and banking heavy goods vehicles/general traffic, monitoring all traffic through the gate and keeping the public safe, McGee is also encouraging their Traffic Marshalls to act as a ‘front of house team’.

The training course is built around a six point ‘signpost’ encompassing cleaning, lighting, litter picking, appearance, communication and being helpful and friendly.

Each Traffic Marshall has been issued a new smart uniform to help them stand out from the rest of the site team. They’ve also been issued with branded cleaning kits to carry out litter picking, and pavement and hoarding cleaning to ensure the site perimeter and local area around the site is kept clean and tidy at all times.

A-Z maps have been issued too to help any tourists who may need assistance with directions – a common issue encountered given the locations of McGee’s central London projects.

Picture: Traffic Marshalls - a friendly face in a lonely city?

Informing on the Perils of Asbestos

This year’s Asbestos the Truth Conference, organised by Lucion Environmental, will be aimed at procurement professionals in local authorities and project managers...