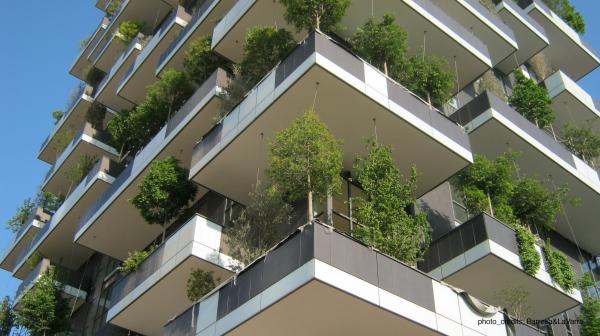 Bosco Verticale has been described as a model of vertical densification of nature within the city and it is causing a stir as to its viability. The 'bioclimatic' skyscraper was pioneered in tropical countries and has often been considered inappropriate for temperate Northern European zones.

Yet this notion has now been challenged by the nearly completed Bosco Verticale project in Milan, Italy. It features two, high-density tower blocks with integrated photovoltaic energy systems and trees and vegetation planted on the facade.

The plants will help capture CO2 and dust in the air, reduce the need to mechanically heat and cool the tower’s apartments. The architects are convinced that they will also make a ‘stunning urban amenity’.

However, it is conceded that there were many technical issues to overcome in order to locate over 800 medium-size trees and 15,000 smaller plants in the structure of the two towers and to predict how they will adapt over time.

It took over two years of working with botanists to decide which trees would be most appropriate for the buildings and the climate.

Architect Stefano Boeri will explain the concept and development of the project at a meeting on 16 December in Milan. Details will be forthcoming.

Pictured: Is it a building? Is it a forest? No, it’s Bosco Verticale in Milan