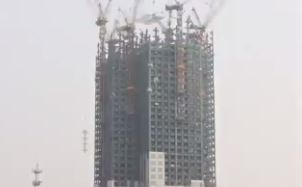 A feat of logistics and construction expertise has resulted in a 57-floor skyscraper being built in record time and in China.

The achievement by Broad Sustainable Building (BSB) can be seen in a time-lapse video of the construction of J57, the company’s latest building, a 57-floor, 80,000sq.m skyscraper, in Changsha, capital of Hunan Province in south-central China.

Fully built with energy efficient, factory produced, Lego-like blocks, this was built by completing a record three floors per day. The J57 represents a smaller prototype for a 220-story building that BSB planned to build, the J220, better known as Sky City. The J57 building has 19 atria of 10m height each, 800 apartments, and office space for 4,000 people.

The use of a modular construction technique, which won a CTBUH Innovation Award in 2013, reduced the use of concrete by 15,000 trucks, which nearly eliminated all the dust that would normally be released during conventional construction, an important advantage in China.

BSB claims that that all of the air inside the building is ‘99.9% pure’, thanks to the tight construction and built-in air conditioning system.

The J57 building has quadruple-pane glass and with a potential saving of more than 10,000 metric tons of CO2 emission compared with a conventionally constructed building of the same size and use.

Picture: The achievement by Broad Sustainable Building (BSB) can be seen in a time-lapse video of the construction of J57, the company’s latest building.